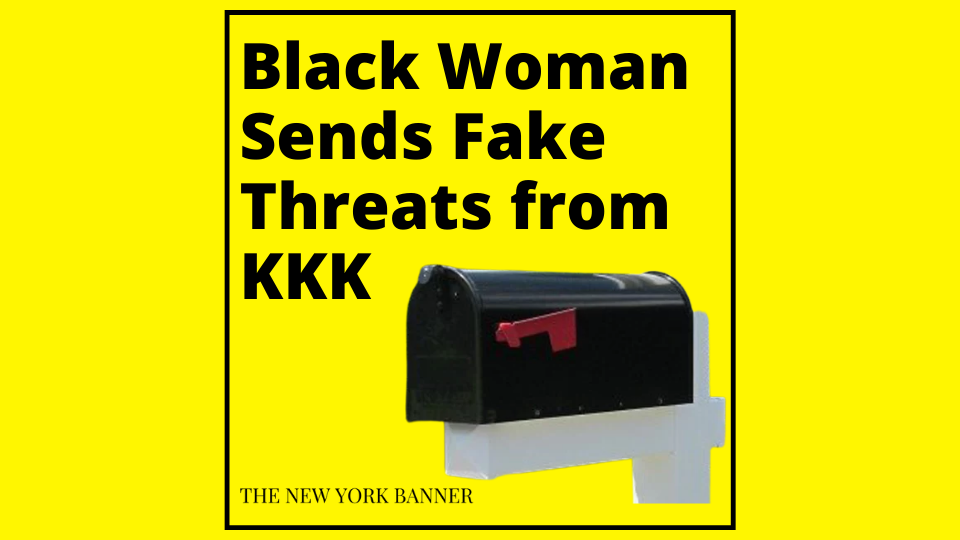 Residents in Brookmont, Georgia received threats of having their homes burned down with them inside. The notes were allegedly from a white KKK member, but were actually from a female, black neighbor.

The motive is not yet known, but it adds to racial tensions and wasted police resources.

Teresha Lucas, 30, of Douglasville has been charged with making the terrorist threats. Teresha Lucas is a black woman, not a white male. It is not believed that she is associated with the KKK.

A series of racially-charged notes left in mailboxes in the Brookmont subdivision led to charges against a resident of the community.

Residents on Manning Drive began receiving the notes last December from a person who claimed to be a white male member of the Ku Klux Klan, who threatened to burn down their homes and kill them, according to detectives with the Douglasville Police Department.

Instead, their investigation led them to Terresha Lucas, a 30-year-old African-American female, who was charged with eight counts of making terroristic threats this month. Accused of writing and placing the notes in her neighbors’ boxes, Lucas allegedly described herself as a six-feet-tall white male with a long, red beard who did not live in the neighborhood.

Detectives Nathan Shumaker and Andre Futch worked the case, which garnered television news coverage March 4 on CBS-46 News when an alarmed resident called the station about a note he received.

“Our investigators had the drive to stick with this case and see it all to the end,” Sparks said. “That’s what we’re all about and this reflects the professionalism and integrity of the department”.

“They stayed with it and put in a lot of hours. Even when some people went to the media, which could have hampered our investigation, we still stuck with it to the end.”

On December 21, residents of two homes on the street received notes in their mailboxes that Shumaker described as racially-motivated. “The notes threatened to burn their houses down and kill them and said that they didn’t belong in the neighborhood,” he said.

Shumaker said the notes were dropped in the mailboxes at night and discovered the next day when the victims went to get their mail.

Subsequent notes with similar verbiage were placed in residents’ mailboxes on Feb. 17, Feb. 22, March 1 and March 3. After a six-month absence, the final note was placed on Sept. 6. Shumaker said there were likely more notes written.

After the first couple of notes were received, Shumaker and Futch went door-to-door to check doorbell cameras and gather whatever information they could from the residents, Shumaker said. They also walked the neighborhood several times and handed out flyers to residents, Futch added.

“By mid-March, we really didn’t have anything to go on,” Shumaker said. However, he and Futch determined that the letters had similar handwriting, tone and verbiage with some distinctive letters that were consistent throughout.

They received the break they needed on Labor Day, Sept. 6, when evidence was found linking the notes to the house of Terresha Lucas. Detectives were able to gather enough evidence to obtain a search warrant.

During the search, detectives found other evidence which ties the suspect to the incidents, according to Shumaker.

Lucas is expected to turn herself in to authorities this week.

While it is unknown what the motive was, some people believe it’s because we don’t have enough white supremacists to meet demand.

we don't have enough white supremacists, so we have to outsource the work

we don’t have enough white supremacists, so we have to outsource the work https://t.co/a1VRJUeQDs

Some point out that a hoax like this marginalizes the victims of actual racism.

Others just want to see justice.

If you FAKE a HATE CRIME you should be CHARGED with a HATE CRIME. https://t.co/T0GXXgpaWo