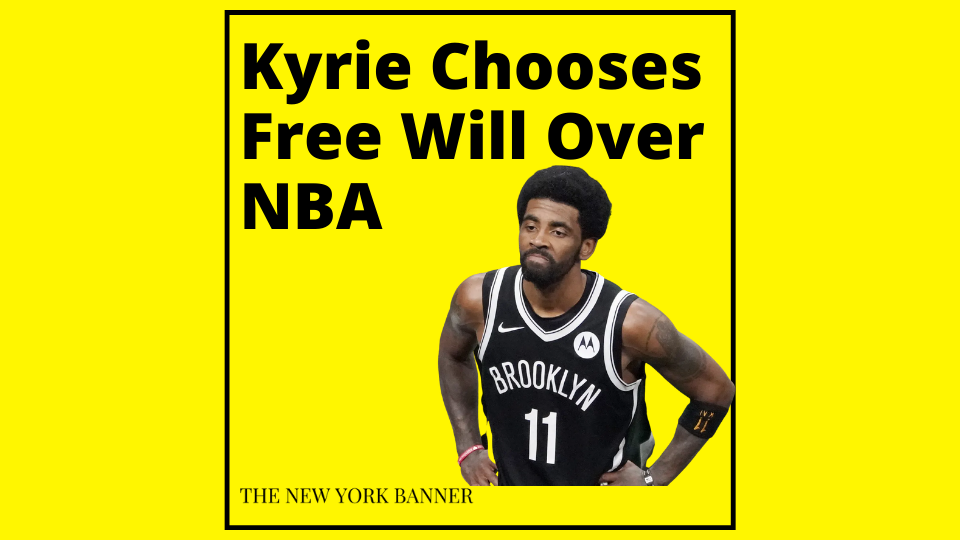 It seems that the championship chances of Brooklyn Nets is meeting a slight bump. Kyrie Irving, known for his eccentric views, is sitting out games in line with the Nets’ new policy on vaccinations. Kyrie refuses to get vaccinated with the Covid-19 jab.

#BrooklynNets GM Sean Marks said in a statement this morning that #KyrieIrving will not play or practice with the team until he is fully vaccinated or the city's vaccine mandate is lifted. Thoughts?! 💭👀 pic.twitter.com/eUPovLVtAp

According to the Brooklyn Nets’ official statement, Kyrie Irving is not a ‘full participant’ due to his refusal to take the jab, and remains so until he complies with the company’s mandate. Even though the management maintains its championship aspirations, it may not be able to do so without Kyrie. Given that the team suffered many setbacks due to injuries in the 2021 season, losing an All-Star in all games until he changes his stance will be detrimental for their championship run. Though, as observed in the official statement, the Brooklyn Nets management is taking a stricter approach compared to the current NBA health protocols on vaccinations.

Getting or Not Getting the Vax is a Personal Decision

The decision also comes with some consequences for Kyrie. As Shams Charania noted, he stands to lose USD 200 million as he continues to represent his personal freedom using his platform. Without regard to the policy of the Brooklyn Nets, he firms up his position, in Charania’s words:

“His (Kyrie) stance is that he is upset that people are losing their jobs due to vaccine mandates. It’s a stance that Irving has explained to close teammates. To him, this is about a grander fight than the one on the court … according to sources with knowledge of Irving’s mindset. It is a decision that he believes he is capable to make given his current life dynamics. “Kyrie wants to be a voice for the voiceless,” one source said.”

Kyrie might be justified on this one. We cannot easily overlook the fact that he is one of the most successful guards in the NBA in the past decade, and should consider his decision to be a strong stance on personal freedoms. Will he stand up to his reputation on living his values?

A recent tweet of Kyrie seem to suggest where his personal conviction is coming from.

I am protected by God and so are my people. We stand together.

A flurry of reactions from NBA twitter from fans commenting on his stance, some sharing their support.

So the #BrooklynNets are not allowing @KyrieIrving to practice or play until he COMPLIES.

The #BrooklynNets were happy to play dozens of games throughout the pandemic, before there was any vaccine. "Danger" wasn't a problem for 18 months of games and revenue.
Only now it is (even though most are vaxxed), because it's now being politicized, weaponized. #KyrieIrving https://t.co/5cM5BbK9CL

Some memes noted the situation comically, too.

Who did this? 😭😭 #BrooklynNets #Nets #KyrieIrving #NBA pic.twitter.com/YhitiLYGfX

Who Controls Our Health?

Overall, strict, nazi-like policies may hurt in the long run. We haven’t seen the full effect of the vaccines, which can only prevent severe Covid-19 illness for less than a year. Other notable NBA players who refuse the Covid-19 jab are Jonathan Isaac of the Orlando Magic and Bradley Beal of the Washington Wizards.