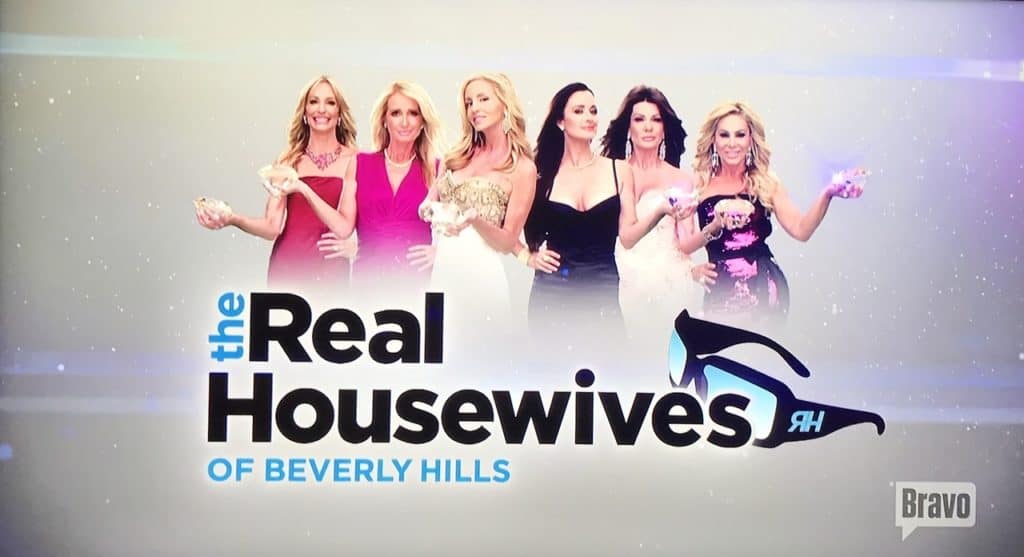 Episode 1 - Life, Liberty and the Pursuit of Wealthiness Kim shuns Taylor as Adrienne charters a private aircraft to transport the other wives to a Sacramento Kings game. Siblings Kim and Kyle are having a disagreement, and Kim is upset when Kyle storms off.

Adrienne unwillingly agrees to bring her husband Paul along as they travel to Vegas for a photo session with a hot male model. At their family’s vacation house in Palm Desert, Kyle and Kim begin to argue after Kyle makes the claim that Kim has no life outside of her children, which could very well be the case. 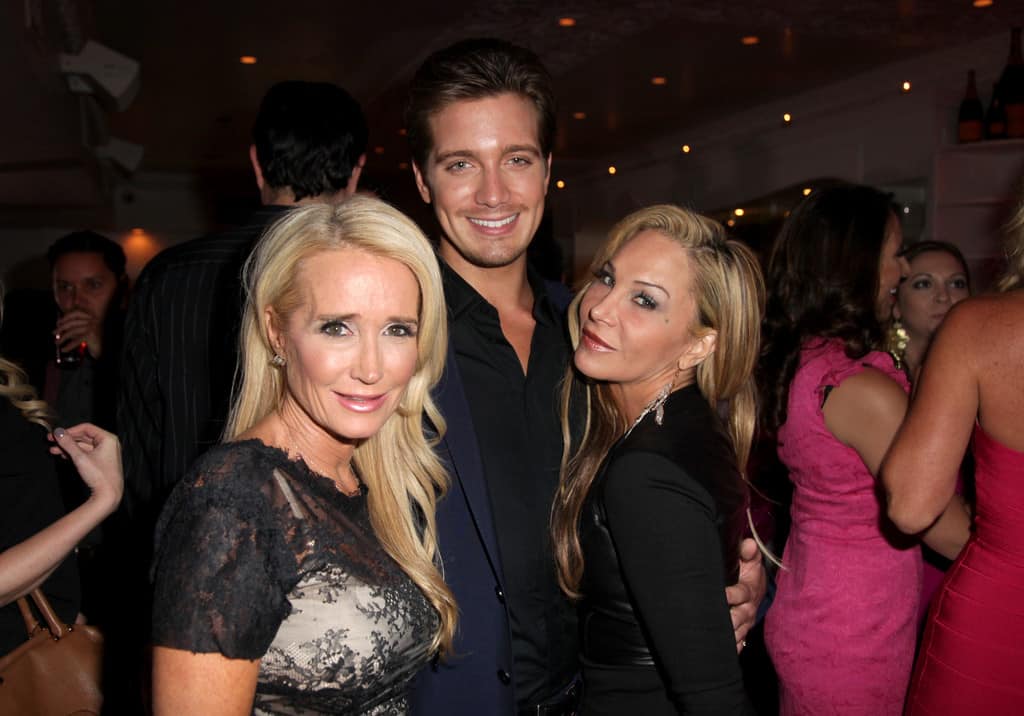 Adrienne invites the ladies and their spouses to a Jay-Z concert at her Las Vegas casino resort, the Palms, where the beauty of Beverly Hills meets the glitz of Las Vegas. Until she and Kyle Richards start arguing, Camille enjoys this weekend getaway with the daughters while her husband, Kelsey Grammer, is in New York working on a Broadway play. Unfortunately for those two, the argument continues back home since what happens in Vegas does not stay in Vegas.

A real housewife, Taylor spent $50,000 on an extravagant tea party to commemorate Kennedy’s fourth birthday. Still, her husband steals the show by bringing in an even larger birthday present. While Lisa Rinna gets a lovely birthday surprise, Camille talks about her marriage while unwinding in her Hawaii home.

Episode 5 - I Would Never Say That

The women are invited by Camille to New York City for the Broadway musical starring Kelsey Grammer‘s world premiere. Still, things get off to a very rocky start. Kyle is still concerned about the repercussions of Adrienne and Camille’s fight in Vegas as she receives some negative news from home. The women are still in New York and hurting from last night’s meltdown. Kim is adding gasoline to the fire by refusing to defend her sister. The day of Kelsey’s premiere is stressful for everyone. Still, it’s a lovely evening, and the women are trying their best to put their issues aside while they are in New York.

Episode 7 - My Mansion is Bigger Than your Mansion

These Beverly Hills beauties are way too tense, so Lisa tries to lighten the situation by setting up Kim on a date with one of her billionaire friends. Camille makes the decision to go shopping in the interim to relax. She immediately embarks on a shopping binge after learning that her husband Kelsey was nominated for a Tony Award and tried on stunning, exorbitantly priced outfits.

Kyle and Mauricio‘s supposedly perfect marriage is tested when they debate whether or not to take the kids on a memorable trip to Napa Valley for a charity bike race. While discussing relatively private information about her past at a charity poker game, Taylor also gives back. A stunning new twist in Camille and Kelsey’s relationship is also revealed.

Episode 9 - The Dinner Party from Hell 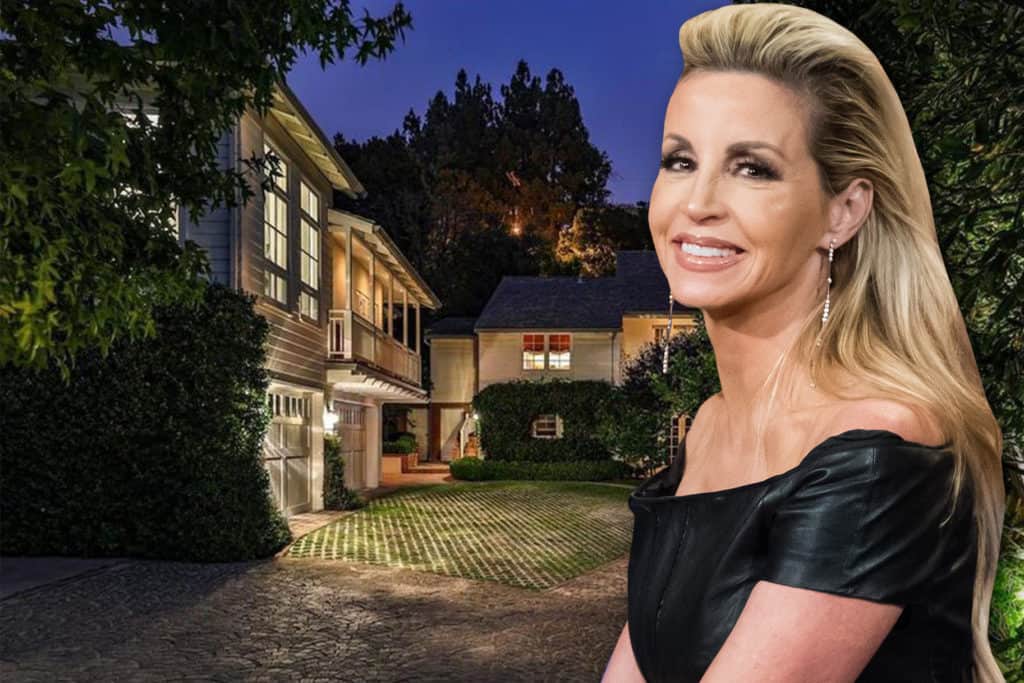 The ladies are invited to Camille’s home for a dinner party. While Kyle brings her friend Faye Resnick, she welcomes her friend Allison Dubois. Taylor, Kyle, Lisa, Adrienne, and Faye become enraged when Allison starts getting drunk. Allison begins criticizing Kyle and Faye’s marriage, which leads to conflict. As a result, the dinner party becomes “a few clowns short of a circus.” Kyle’s private life is still being attacked by Allison, who acts as a terrible girl.

Kim draws Taylor into yet another quarrel as Kyle and Camille begin arguing again. When Taylor ends it, the women leave in a huff. Kyle confronts Kim for causing a fight with Taylor outside Camille’s home. While Camille is distracted, Allison insults Kyle in front of her. The women talk about the real reason Camille brought Allison in the limo on the way home.

Kyle receives a text from Camille at a charity event Lisa is giving, telling him that she and Kelsey would no longer be working with Kyle’s realtor, husband Mauricio, as a result of Kyle’s alleged attacks on Camille. After the argument at Camille’s house, Taylor and Kim get together to try to mend their relationship. While Camille and Kyle reconcile and promise to put their arguments in the past behind them, Cedric and Lisa attend Taylor’s “Roaring 20’s Party” in drag. 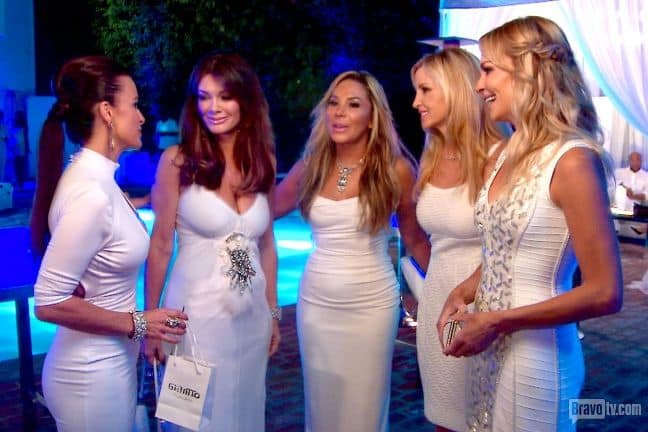 Adrienne, Kyle, and their families accept Camille’s invitation to a tennis and swimming get-together, and everything goes smoothly. Cedric shares his story of growing up on the streets of Paris and in foster homes until Lisa took him in in his teens at Lisa’s daughter’s birthday celebration. Kyle also throws Mauricio a “White Party” birthday party. Still, when Russell leaves early, Taylor and Russell’s marital problems are brought to light. Attending the party, Camille allegedly gave Kyle a book titled “How to Behave and Why” as a joke.

Adrienne, Kyle, and their families accept Camille’s invitation to a tennis and swimming get-together, and everything goes smoothly. Cedric shares his story of growing up on the streets of Paris and in foster homes until Lisa took him in in his teens at Lisa’s daughter’s birthday celebration. Kyle also throws Mauricio a “White Party” birthday party. Still, when Russell leaves early, Taylor and Russell’s marital problems are brought to light. Attending the party, Camille allegedly gave Kyle a book titled “How to Behave and Why” as a joke. 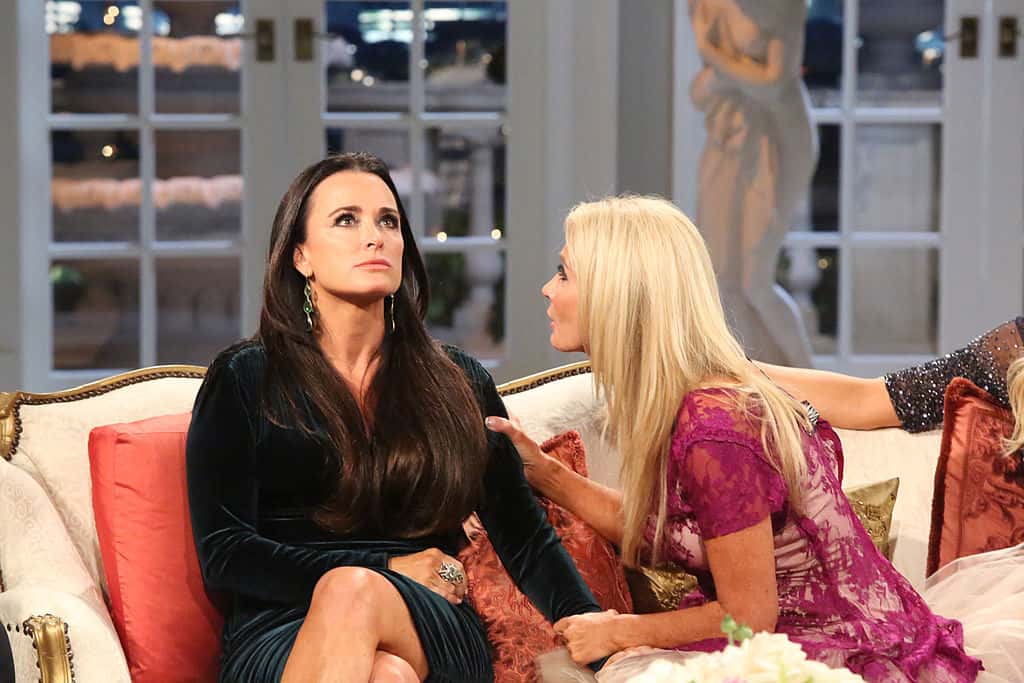 Kyle talks about her relationship issues with Kim with her psychic. Lisa confronts Taylor about what she said to Camille before the altercation in New York City during lunch. Still, Taylor claims she only has an issue with Kim. Cedric resists leaving until Lisa and Ken ultimately urge him to leave. Taylor, celebrating her 39th birthday with Russell, confronts Kim about New York, which leads to a fight between Kim and the other housewives.

Camille chooses not to go to Taylor’s party since she is still grieving Kelsey’s breakup with her. After the argument, Kyle enters the limo, prompting Kim to label Adrienne a liar and Kyle to refer to Kim as “sick” and “an alcoholic” and promise to cease providing for her. Adrienne tries to advise Kim on how to patch things up with Kyle.

The girls get together to talk about the season‘s happenings. Under the direction of Bravo’s Andy Cohen, the ladies of Beverly Hills-Taylor Armstrong, Camille Grammer, Adrienne Maloof, Kim Richards, Kyle Richards, and Lisa Vanderpump-assemble to explain some of the season‘s most talked-about antics and address some of the most important questions facing the country. 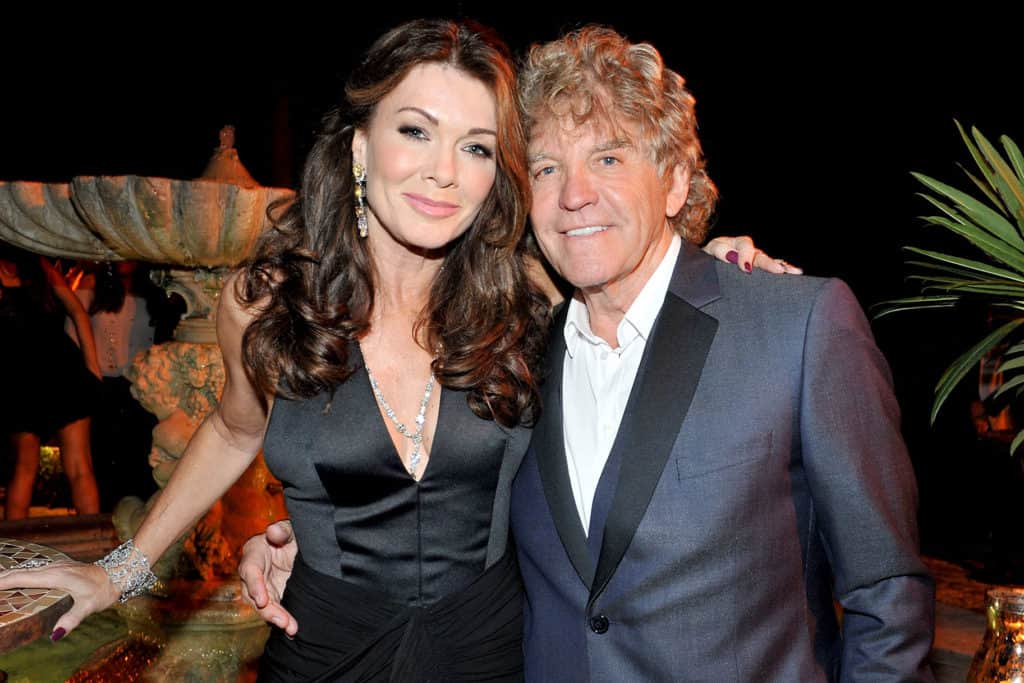 The girls get together to talk about the season‘s happenings. The men come in during this part, and Ken, Lisa’s husband, expresses his real feelings about Cedric. Under the direction of Bravo’s Andy Cohen, the ladies of Beverly Hills-Taylor Armstrong, Camille Grammer, Adrienne Maloof, Kim Richards, Kyle Richards, and Lisa Vanderpump-convene to explain some of the season‘s most hotly debated antics and address some of the most important issues facing the country.

The most talked-about Housewives in 90210 appear in never-before-seen footage from The Lost Footage. Each person’s dirty laundry will be exposed with the husbands and Giggy along for the trip. 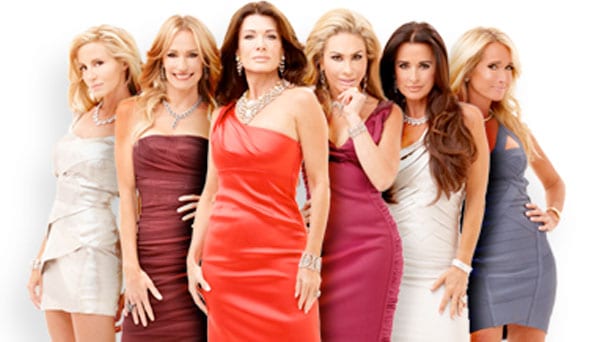 Adrienne Maloof reveals that she and her family are the Sacramento Kings’ owners in the first episode of The Real Housewives of Beverly Hills. Maloof plans to watch a game and invites the other spouses, her neighbor Lisa Vanderpump, a savvy British restaurateur, sisters, and former child actors.

Kyle and Kim Richards, Taylor Armstrong, a stunning woman from Oklahoma, and Camille Grammer, the soon-to-be ex-wife of well-known actor Kelsey Grammer. The women all fly together in a private jet to enjoy VIP treatment courtside at the game. At their vacation house, Kim and Kyle fight after Kim is accused of not having a life outside of her kids.

Later, as Kim’s daughter is celebrating her birthday at a spa, the conflict worsens. After Kim declines to defend Kyle in New York City against Grammer, things between the two sisters get worse. The two sisters’ relationship reaches a volatile turning point at Armstrong’s birthday celebration on a rooftop. Kyle calls Kim out for being an alcoholic after Kim accuses him of stealing her house. 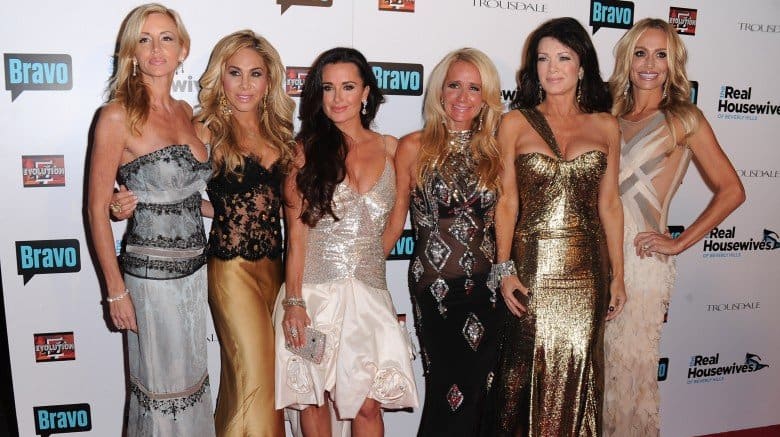 Kyle and her husband decide to take a trip to the Napa Valley for an intense charity bike ride but debate whether to take their daughters or not. Kyle hosts her annual white party with the ladies in attendance, but Armstrong’s issues with her husband take center stage. Kyle is emotional when her daughter Farrah reaches a milestone in life when graduating from college. Kyle is left saddened by her nieces, Paris and Nicky Hilton, choice of a trip to Europe over attending the graduation.

Grammer lives alone in Beverly Hills and is thrilled to visit the Palms Casino Resort. Still, the two quickly start to argue, and the argument continues once they return to Beverly Hills. In her Hawaii home, Grammer discusses her marriage in detail. Kyle is concerned about what transpired between her and Grammer in Las Vegas when Grammer invites all the ladies to her husband’s Broadway production in New York.

Everything goes smoothly until everyone sits down to supper and the truth is revealed. Grammer makes the decision to practice retail therapy. Goes into overdrive shortly after finding out that her spouse is a Tony Award nominee and chooses to purchase some pricey clothes. After Kelsey says he wants to stay in New York since his career in Los Angeles is ended, and he feels more valued there, she and her husband become even more estranged from one another. 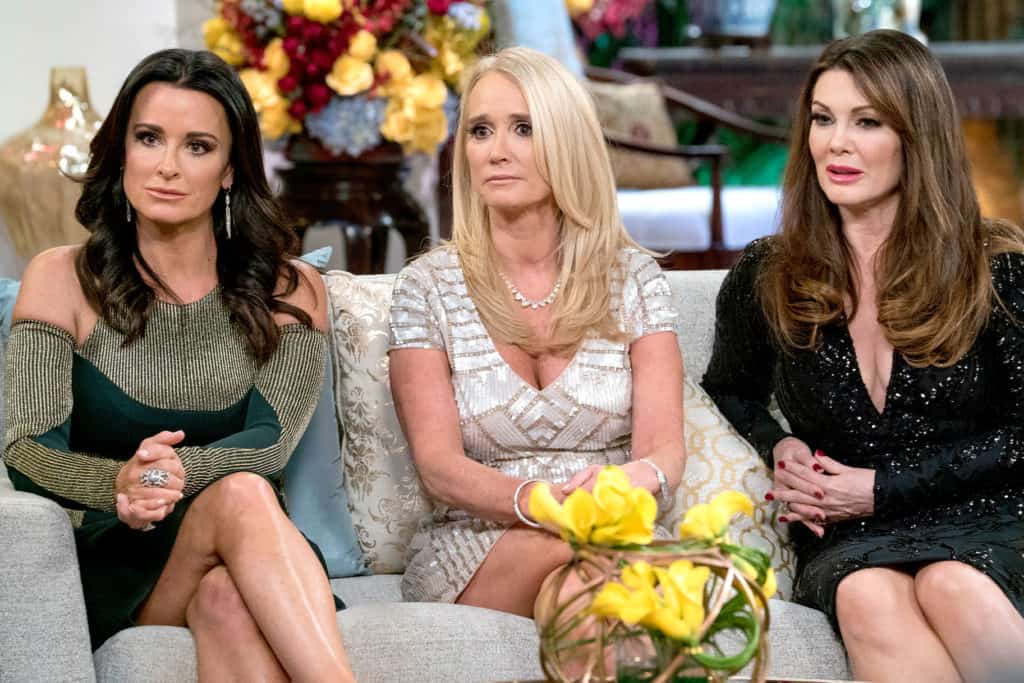 Grammer’s home is in Beverly Hills, so she isn’t thrilled about the thought of moving there. Later, when Grammer holds a dinner party at her Malibu home, the tension between her and Kyle intensifies. Allison DuBois, a clairvoyant and Grammer’s acquaintance, is present. Everyone at the table is shocked after DuBois shares what she believes Kyle’s future will hold.

Grammer notices the marriage’s fracture as Kelsey continues to spend time in New York. Later, when Kelsey admits he wants to dissolve their marriage, things worsen between Grammer and Kelsey. Armstrong spends $50,000 on an extravagant Mad Hatter-themed tea party for her daughter’s birthday. Still, her husband quickly outdoes her by getting the little girl a puppy.

Maloof was present for support when Armstrong spoke at a charity poker tournament and said she was a domestic abuse victim. Armstrong throws a roaring twenties-themed costume party. Everyone becomes uneasy when Grammer and Kyle finally interact at the party after their altercation at Grammer’s Malibu home. After Kyle’s white party, Armstrong’s marital problems persisted, and she tried to find a solution.

Maloof travels to Las Vegas for a picture shoot with a stunning model, but she regrets taking her husband Paul along. Maloof invites the remaining women to the Palms Casino Resort in Las Vegas to watch Jay-Z perform. For her birthday, Vanderpump receives a poignant gift from her husband, two kids, and her house guest, Cedric, whom she considers to be a son. By setting up Kim on a date with her billionaire buddy, the latter, who is watching the drama, tries to cheer up the group.

While assisting cast member Cedric in obtaining his license, Vanderpump is taken aback by the DMV staff’s demeanor. Grammer decides not to attend a charity dinner he holds at her restaurant Villa Blanca for burn victims because she conflicts with Kyle. Following a devastating revelation about Cedric’s past concerning his family and his voyage to the United States, Vanderpump stands by him.