What Happened on The Real Housewives of Atlanta Season 3? (Full Recap) 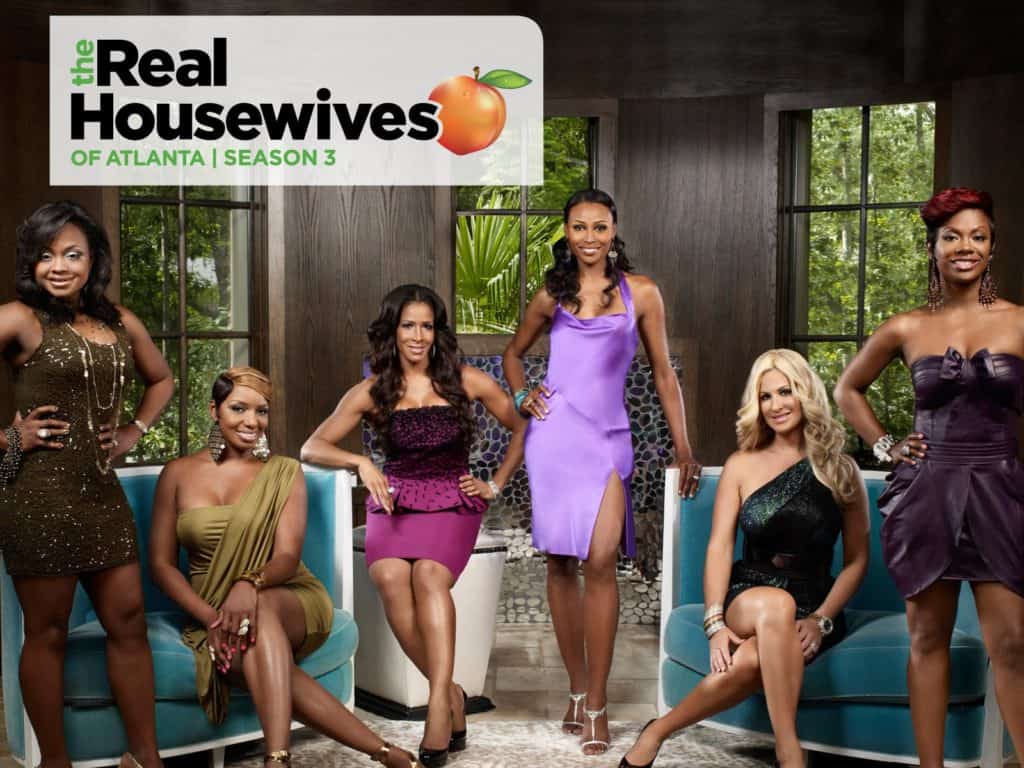 The Real Housewives of Atlanta Season 3 was released on October 4, 2010, and ran until February 20, 2011, on Bravo. The reality TV show continues to follow the Atlanta housewives’ lives, including the drama and conflicts surrounding them.

The second installment consisted of 18 episodes. NeNe Leakes, Shereé Whitfield, Kim Zolciak, and Kandi Burruss are still part of the series. In addition to these four housewives, two new cast members have been added to the list: Cynthia Bailey and Phaedra Parks.

Cast and Overview of The Real Housewives in Atlanta Season 3

Cynthia, who has appeared on the cover of Essence magazine, is a model born in Alabama and has a daughter named Noelle. In the third installment, she struggles with a marriage ultimatum from her three-year lover, Peter Thomas, while also strengthening her friendship with NeNe.

Phaedra is an entertainment lawyer and a friend of Kandi and Dwight. Her plot revolved around her marriage to a younger man, Apollo, who was imprisoned for a “white collar crime,” and the housewives loved to gossip about it. Also, Phaedra is expecting a child.

While pursuing a career as an entertainment reporter for the local news, Nene is dealing with a troubled marriage.

Shereé wants to be an actress. She hires an acting coach and says she hopes to win an Oscar someday.

Kim will resume her music career and will also join Kandi on tour.

Kandi is reeling over the death of her ex-fiancé, AJ, and attempting to mend her connection with her cancer-stricken father.

Lisa Wu left The Real Housewives of Atlanta Season 3 but returned in a guest appearance. The latest installment had NeNe and Kim reconciling, as the former considered divorcing her husband Gregg while the latter started a lesbian relationship.

Phaedra, who was in the midst of her pregnancy, battled with her husband, Apollo Nida, about their opposing views on parenting. Later in the season, she gave birth. Kim and Kandi continued to collaborate on music, despite their creative disagreements.

Cynthia got engaged to her boyfriend, Peter Thomas. The couple got married in the season 3 finale, despite the advice of her mother and sister. Kandi, NeNe, and Kim clashed while the latter two women were on a promotional concert tour. NeNe, Kim, and Sheree attend a couture shoe event, where they meet new housewife Phaedra, the pregnant, sophisticated, and outspoken attorney-to-the-stars. She arrives with her old pal, Dwight. Shereé pursues her long-held ambition of becoming an actress while Kandi returns to the dating scene.

Gossip spreads quickly when Kim announces her lesbian affair in the media. Just in time for the inside scoop, NeNe rekindles her rocky relationship with her. NeNe has her own drama, as well. Her marriage is in jeopardy, and Dwight has been circulating false information about her.

Sheree agrees to go on a blind date with a doctor, and she shocks herself by liking the dance club he brings her to, even though it’s in the wrong area of town. Kim has been invited to perform at the White Party, a huge gay circuit party held in Palm Springs.

NeNe goes to the Atlanta Dogwood Festival with her friend Cynthia and shares her side of the fight with Dwight. Cynthia, a model who recently moved to Atlanta, lends NeNe a sympathetic ear, but her problems are far from over. Having recently kicked Brice out of the house, her home life is in disarray.

Meanwhile, Kandi collaborates with multi-platinum musician Ne-Yo on a new single. She then tries out some new material at Uptown Supper Club in Atlanta, which is run by Cynthia and her boyfriend, Peter. Kandi travels to Palm Springs to advise and encourage Kim, who has been invited to sing at the White Party, one of the biggest gay circuit parties. However, there is only one song on her playlist for her first-ever concert appearance.

Sheree takes the high road when it comes to Dwight’s assertions that he paid for the “She by Sheree” fashion show last year. She also reunites with her eldest daughter, Tierra, who has returned to Atlanta after attending college.

Meanwhile, NeNe and Brentt openly discuss Brice’s run-in with the authorities. Phaedra and Apollo disagree over parenting, while new housewife Cynthia struggles with her views about marriage.

Kim is inspired by a late-night show and asks Kandi to create her next single. NeNe is struggling with her marriage and her relationship with Bryson, but she is determined to get her “happy” back, even if that means having plastic surgery.

Phaedra and Cynthia get to know each other better while attending Atlanta’s most prominent horse racing event, the Steeplechase. Dwight also helps Phaedra plan her luxurious Kentucky Derby-themed baby shower. Kandi, Cynthia, Lisa, and Kim quickly realize that this shower is unlike any other they’ve ever attended.

The housewives gather at Cynthia’s to celebrate Mother’s Day, and sex becomes their main topic during the meal. But then, the conversation shifted during dessert when NeNe opened up about her marital issues. Also, Kim discusses cheating as a guest on Kandi’s web chat show “Kandi Koated Nights.”

Meanwhile, Phaedra becomes personal with a jar of pickles during her pregnancy photo shoot. Sheree enjoys her date with the “Love Doctor,” while NeNe tells Cynthia about more than just her new nose.

NeNe seeks to motivate her late-blooming son’s career path by introducing him to Cynthia’s club-owner boyfriend. With Kandi’s assistance, Kim records some music, but there is squabbling over creative differences. NeNe’s marital problems are reaching a breaking point. A driven Sheree enters a local charity dance competition in an effort to show her dancing ability. Kandi and Kim’s relationship is strained as a result of a new song. Cynthia is surprised by a sneaky proposal, while Kim finds a new crush, football player Kroy Biermann. Phaedra is preparing to give birth.

While NeNe looks for a job as an entertainment reporter at a local TV station, Sheree throws a party. However, the drama escalates after the former learns a secret about the latter’s date. Phaedra travels to Augusta to see her doctor as she prepares to give birth. But then, her due date is still a mystery to everyone. In order to make “The Ring Didn’t Mean a Thing” more appealing to Kim, Kandi rewrites it. She then performs the updated song during Kim’s parents’ dinner party. Cynthia works with a famous stylist friend and a high-end wedding planner to organize her dream wedding.

As she brings her newborn child home from the hospital, Phaedra learns how to adjust to motherhood and proves that it doesn’t get any easier. After reaching her breaking point, Sheree confronts “the doctor” about his evasive behavior.

Kim struggles to answer her daughter’s queries regarding sex. As NeNe’s marital issues are made public, her marriage is on the verge of disintegrating, which causes a dramatic confrontation with Gregg.

While Kim visited Jan again to practice singing “The Ring Didn’t Mean a Thing,” Kandi competes in a NASCAR race for charity and does alright. Dwight informs Phaedra of the rumors circulating about her puzzling pregnancy. She is upset about this and plans to confront the ladies about the rumor. The housewives also believe Cynthia’s priorities are off, but Cynthia has a plan to smooth things over with NeNe through a friend contract.

After their heated phone argument, tension still lingers between NeNe and Peter. After hearing positive news regarding her talent agency audition, Sheree asks Kandi for assistance in getting ready for her part in a nearby play.

Meanwhile, Kim begins rehearsing with Kandi for her forthcoming tour, but she’s more interested in get-skinny-quick treatments than memorizing her show’s choreography. Cynthia makes an effort to set things right with NeNe and make amends for the awkwardness of their “friendship contract.” But NeNe faces bigger problems after she is required to conduct a significant star interview for her local entertainment section.

Phaedra is in full protective mommy mode, having just returned from the maternity ward. She confronts Kim with all of her remarks regarding her due date. Sheree and her daughter Tierra go furniture shopping.

Kandi has just one week to complete her new record before the start of her tour and ensure that Kim is prepared to open for her.

NeNe feels confident that she will ace her interview with Jermaine Dupri, but the situation didn’t go as planned. Phaedra worries about having Kim at Ayden’s Sip n’ See party, their ultra-southern baby debut. But when Kim arrives with her nursing license, Phaedra is willing to listen to her viewpoint.

After bidding farewell, Kim is certain she will succeed on Kandi’s promotional tour. But as the tour begins in Charlotte and Kim starts whining about everything, including the schedule and the size of her bunk, Kandi realizes she had no idea what she was getting into.

Cynthia’s dream wedding is at risk when her fiancé, Peter, reveals that his restaurant is on the verge of going bankrupt, and not even counseling can help them. Sheree sends her kids off for a vacation with their father, while Phaedra struggles with being a lawyer and a new mother at the same time. NeNe keeps it real as she does her first on-air interview with Jermaine Dupri for her local news show.

Yet, Kim interprets NeNe’s on-air reference to ‘Tardy for the Party’ as a purposeful attack. With only two weeks before their wedding, Peter admits to Cynthia that their financial situation is dire, threatening their wedding plans and relationship.

Kandi has had enough of Kim and Sweetie’s antics on their bus tour, and when NeNe accompanies them to Orlando for the penultimate leg of the trip, a huge brawl breaks out among the women. Cynthia participates in a swimsuit fashion presentation during Miami Swim Week, giving a quick break from the conflict. However, her excitement at being back on the runway is fleeting. She breaks down in tears when pressed by the other women to discuss her upcoming wedding.

Phaedra, Sheree, and Cynthia are waiting for Kandi’s tour bus to arrive in Miami. They soon abandon their plans for a carefree weekend to celebrate Cynthia’s bachelorette when the bus doors open. They witnessed Kim and NeNe in the midst of a heated argument.

As Kim and Kandi celebrate the end of their promotional tour, NeNe invites her best friend Diana to stay at the house with the housewives. The third season comes to a close with Cynthia and Peter’s marriage. But as with any Atlanta event, the drama soon follows. Kandi and Kim discuss their disagreements in “The Ring Didn’t Mean a Thing,” while Gregg expresses regret for how he treated NeNe.

Kim has her breasts redone and declares that she and Kroy are getting serious with their relationship. During a movie audition, Sheree’s acting abilities are put to the ultimate test. Phaedra returns to work following the birth of her child. Hosted by Andy Cohen, the housewives reunite to talk about the dramatic events of the third season, and NeNe plays Kim again. In the second installment of their season three reunion, the ladies return and respond to some of America’s burning questions.