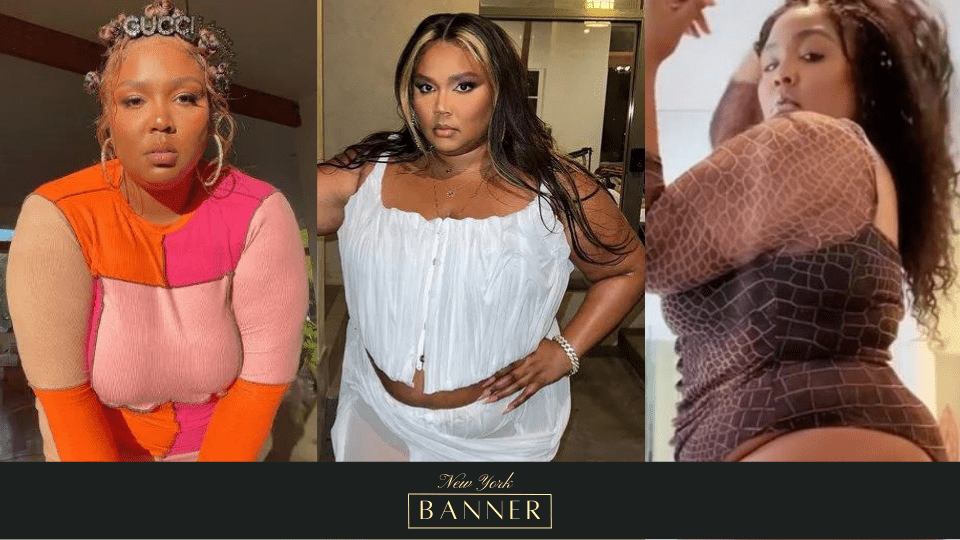 As the new year begins, there is typically discussion about diets and weight reduction. And although it’s important to establish healthy goals for yourself and your body, Lizzo is here to remind us that weight fluctuation is natural and that bodies are worth appreciating in all forms, not just when they’ve lost a few pounds.

Lizzo is widely recognized for standing up to body shamers and promoting body positivity. In March 2022, she told People she had discovered how to love her natural physique.

She added: “I think I have a really hot body! It may not be one person’s ideal body type just like, say, Kim Kardashian might not be someone’s ideal, but she’s a body icon and has created a modern-day beauty standard.”

She continued, “And what I’m doing is stepping into my confidence and my power to create my own beauty standard.” However, it doesn’t mean she isn’t dedicated to maintaining her health.

Lizzo has also spoken openly about her eating habits. She spent the majority of her adult life as a vegetarian before deciding to switch to veganism in the summer of 2020, according to Plant Based News. On her TikTok page, she frequently posted recipes. A typical day may have a green morning smoothie, a kale salad, and mushroom balls, she said in a video from 2020. 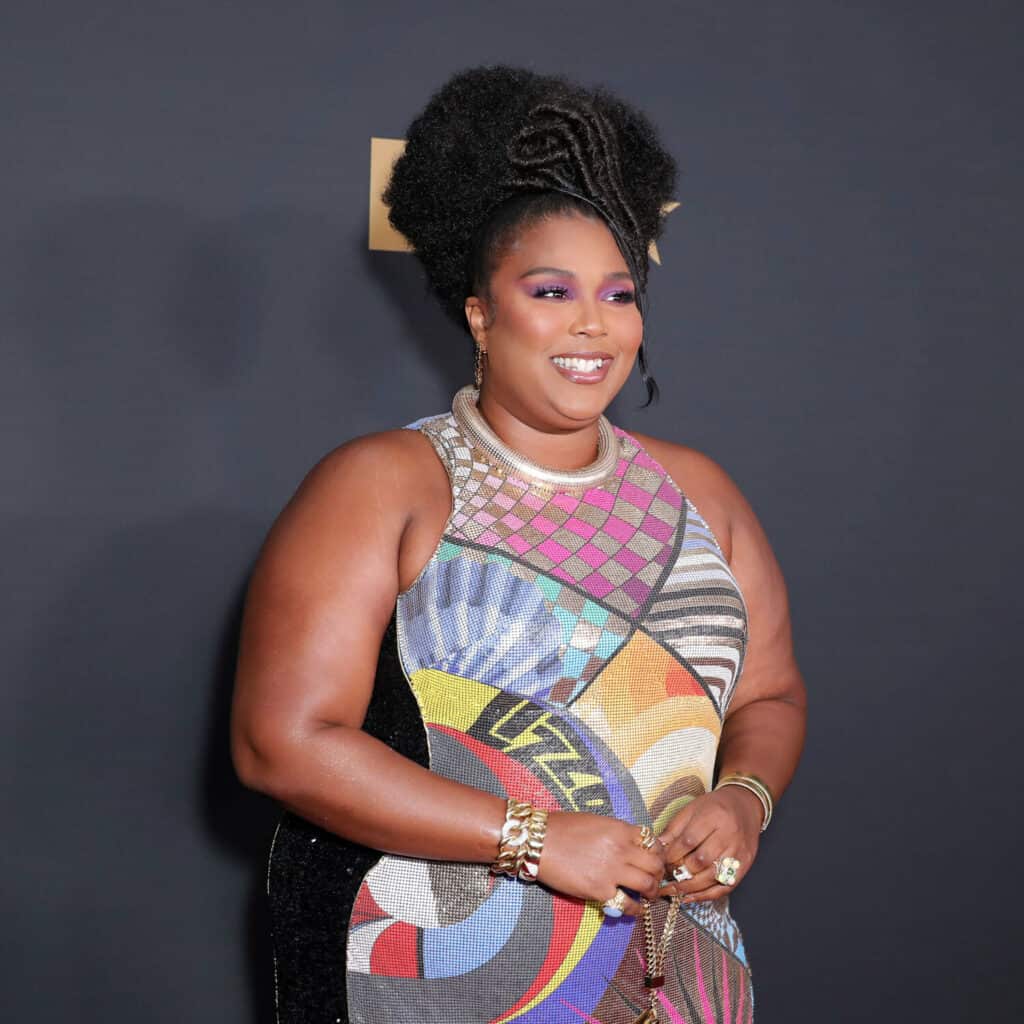 A Detroit, Michigan native, Melissa Viviane Jefferson, professionally known as Lizzo, is a prominent American singer, rapper, songwriter, and flutist. She has earned a reputation as one of the world’s hottest performers in the past several years.

At age 10, she began classical flute lessons with renowned music educator Claudia Momen. Then, at 14, she started rapping, according to the reports, and after mixing with various musicians, she had to change her name to “Lizzo,” which makes groovy sense.

After high school, she continued her studies in classical music at the University of Houston. When she was 21 years old, her father passed away, and she decided to try her luck in the music industry by enduring a year without a car.

She made headlines on social media in December 2020 after posting on her Instagram story that she had gone on a 10-day, smoothie-based detox to reduce body weight.

Lizzo is one of those who experienced a dramatic weight loss during the epidemic, even though most individuals gained weight at that time. The “Truth Hurts” singer saw herself as a body-positive advocate and revealed her new appearance to her followers by uploading a photo on Instagram with the comment, “New body, who dis! Took a DNA test; turns out she’s 100% that b*tch.”

Around 308 pounds, or 140 kg, was Lizzo’s starting weight when she began her weight loss journey. She reduced almost 60 pounds after an intense effort, and her stunning body transformation quickly went viral on the internet.

These are Lizzo’s other physical measurements:

How Much Does Lizzo Weight?

Lizzo weighs around 118 kg (260 lbs). Since the beginning of her career, she has been known for being plus-sized. However, Lizzo has supported the body positivity movement since she started helping women accept and love their bodies.

“It’s easy,” she added. “I would like to be a body-normative. I want to normalize my body.”

The “Cuz I Love You” singer is determined to achieve her goal of becoming the first black plus-sized woman to appear on the Vogue cover in September 2020. Lizzo wrote on Instagram about her proud moment:

“I am the first big black woman on the cover of @voguemagazine. The first black anything feels overdue. But our time has come. To all my black girls, if someone like you hasn’t done it yet- BE THE FIRST.” 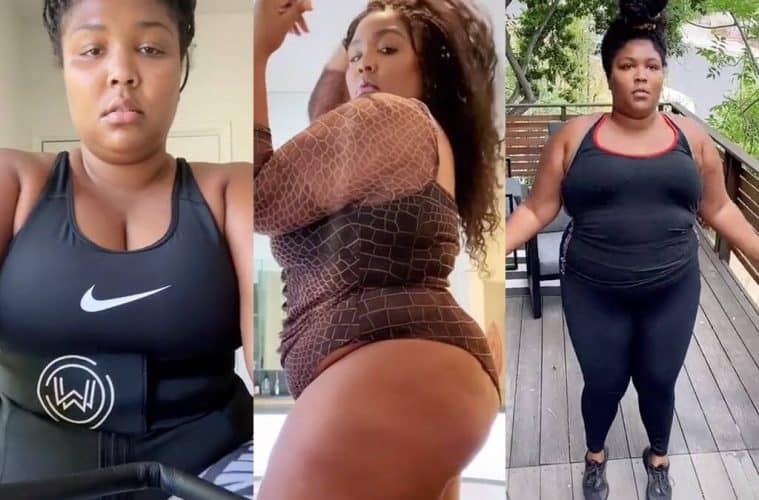 The process of Lizzo’s weight loss was somewhat controversial. As mentioned earlier, the singer debuted her 10-day smoothie detox cleanse in 2020. However, a lot of medical professionals have criticized detox cleanses for not doing anything to aid in weight reduction.

Author and nutritionist J.J. Smith created Lizzo’s weight reduction smoothie detox program. On her Instagram, some followers complained that she had pushed risky methods for losing weight, while others praised her.

I fed myself greens and water and fruit and protein and sunlight. You don’t have to do that to be beautiful or healthy. That was my way. You can do life your way. Remember, despite anything anyone says or does, DO WHAT YOU WANT WITH YOUR BODY.”

Around 308 pounds, or 140 kg, was Lizzo’s starting weight when she began her weight loss journey. She reduced almost 60 pounds after an intense effort, and her stunning body transformation quickly went viral on the internet.

The latest controversy in 2022 focused on the pop star Lizzo’s weight. Lizzo didn’t take this offhandedly, even if it was done by a comedian in the spirit of a stage performance.

Nowadays, no one tolerates body-shaming, and given Lizzo’s remarkable weight loss transformation, Aries Spears made a hurtful remark brought to his attention by the Lizzo fans group.

The rapper disclosed her vegan diet publicly. She has lived a healthy lifestyle while trying to lose weight. The “Truth Hurts” singer said that she followed the following diet:

Lunch: Lizzo always enjoys her favorite salad for lunch, which is comprised entirely of green veggies.

Snacks: There is just one snack on Lizzo’s list, and it is her favorite: hummus.

Dinner:  Although there are not many different dishes in Lizzo’s meal, she favors the truffle-chickpea-mushroom balls with quinoa. Lizzo eats the remaining salad with her dinner as well.

Dessert: She always chooses desserts that are wholesome and packed with nutrients. Butter jelly smoothies are Lizzo’s go-to dessert, but she also admitted making them with frozen strawberries, oat milk, and vanilla protein powder.

She recently disclosed that she follows a vegan diet. The rapper embraced a strict vegan diet and loved plant-based foods. She frequently made announcements about her new vegan lifestyle in her TikTok videos. Lizzo presents a brand-new recipe that has been tried in every video.

Lizzo Weight Loss Results Before and After Now 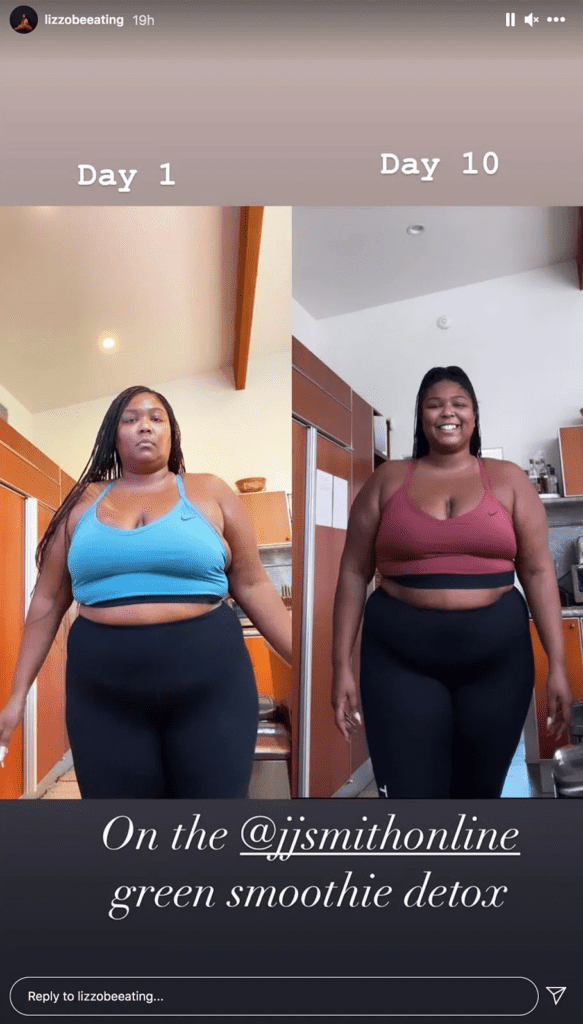 Although Lizzo experienced the kind of life-altering low that no one wants to experience, she was able to maintain a positive outlook and apply that outlook to her body image, which served as an example to millions of others.

She wishes that no one in the world would ever have to experience body-shaming, which is a daily hell for those who are only a few pounds heavier than the average.

“That’s just the society we’re all unfortunately born in,” Lizzo said in an interview with Teen Vogue, “The one where you have to hit your worst and hate yourself in order to love yourself. Those laws only exist because self-hate is so prevalent. Body positivity only exists because body negativity is the norm.”