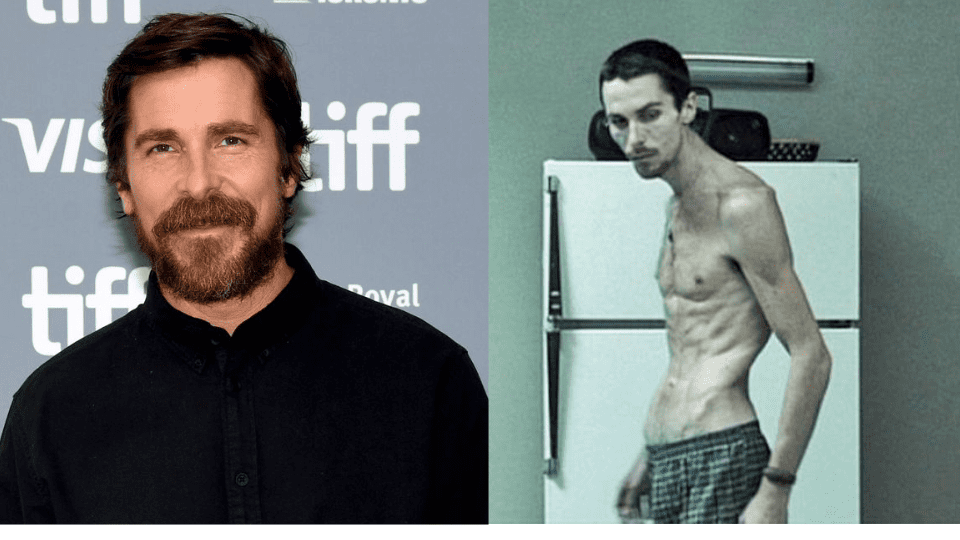 How Did Christian Bale Lose Weight?

Christian Bale and his journey to lose weight for his movie “The Machinist.”

English actor Christian Bale, whose full name is Christian Charles Philip Bale, is most recognized for his complex, mentally complex characters. In 1987’s “Empire of the Sun,” Bale made his big-screen debut at age 13, despite having received little professional acting training. A tremendous accomplishment for someone this young; since then, he has acted in various roles.

After receiving excessive attention from the media for his performance, he developed a deep sense of anonymity and worked hard to avoid publicizing his personal matters. In addition, he is renowned for his versatility and body changes for his characters; he has acted as the protagonist in movies of many various genres.

Christian has won numerous accolades, including two “Golden Globe Awards” and an “Academy Award.” Forbes magazine named him among the highest-paid actors in 2014. Christian is particularly well-known for having a huge fan base; in the magazine’s tenth-anniversary issue, it was stated that he was among the “Top 8 Most Powerful Cult Figures of the Past Decade” due to his popularity on the Internet.

Moreover, the actor began his journey in the entertainment industry when, at the age of 8, he was chosen to appear in a Lenor fabric softener commercial in 1982. A year later, he played a young rock star in a “Pac-Man” cereal commercial, and in 1984, he made his public appearance in “The Nerd” with Rowan Atkinson.

Although Christian frequently changes his appearance for movies, his weight drop for “The Machinist” was shocking.

Christian Bale was being aggressively hyped as either the new James Bond or Batman of his era. Still, following a series of movies he felt personally dissatisfied with, he took some time apart before returning with the 2004 thriller “The Machinist.” However, Christian’s portrayal of the emaciated, insomniac Trevor Reznik’s “The Machinist” garners more attention than any of the other roles combined.

As an actor, Christian put too much effort into losing four stone (25 kg) in four months by following an extremely calorie-restrictive diet. All in an effort to shed some of the excess weight from his previous performance in the 2000 movie American Psycho before playing the role of Reznik, a factory worker with psychiatric issues.

It was shocking that he chose a diet plan consisting of solely black coffee, one tin of tuna, and one apple every day, which went on for the first four months of his weight loss program.

“This is less than 200 calories a day, so it’s not healthy at all,” according to Harley Street health expert Daniel O’Shaughnessy, who told Esquire UK that “an extreme diet like this will play havoc with your metabolism and cause a lot of stress on the body.”

In a 2019 interview with E!, Christian stated that he has no desire to consider making any further major Hollywood changes. The Machinist actor continued by saying, “I’ve become a little bit more boring now because I’m older, and I feel like if I keep doing what I’ve done in the past, I’m going to die. So, I’d prefer not to die.”

His reported weight loss of 63 pounds for a movie role is remarkable for any actor. Anybody who even thinks about following Bale’s Machinist should be cautious since it is clear at this moment that it is not suitable for anyone to use as their diet.

How Did Will Smith Lose Weight?

How Did Yasra Rizvi Lose Weight?

What is Christian Bale’s diet plan?

As the actor disclosed his diet regimen, it became apparent that it was not a smart option for other people to adhere to it. Christian’s food regimen could work for him, but it might not be suitable for other people, which could put their health at risk if they ever try to adhere to it. The actor revealed that he only had a tin can of tuna and an apple per day. Additional to his diet plan is his black coffee.

Moreover, there are many healthier and less dangerous diets that people can follow instead of adhering to the actor’s diet plan. The Mediterranean Diet is one such meal plan that has been proven to be particularly successful in reducing obesity and heart disease. Another healthy diet is called the Ketogenic Diet, which involves eating very little carbohydrates but high amounts of fats and protein.

This diet has become very popular in recent years, as people are finding that it helps them lose weight and maintain a healthy lifestyle. The Paleo Diet is another well-known diet that many people have followed for years because it is based on traditional foods that are naturally low in sugar and high in nutrients.

It is vital to understand that no “one size fits all” diet will be suitable for everyone. Everyone’s body is different and requires different types of food in order to maintain optimal health. That is why it is vital to speak with a dietitian or a specialist before making any major adjustments to your diet.

If you are planning on following a particular diet for a certain period in order to shed some pounds, make sure that it is a healthy and safe option so that you will be able to maintain your weight loss in the long run.

What routines are included in Christian Bale’s workout plan?

Since the outstanding actor is generally renowned for changing his appearance depending on his part at a particular time, it is surprising to actually discover to what extent his diet and exercise regime is. Furthermore, it’s assumed that Christian worked out more than five days a week. Christian enjoys including complicated exercises, bodyweight exercises, and weights in his training.

His fitness regimen also includes power routines and composite exercises, giving him the agility and flexibility needed for acting. Other experts believe that maintaining a healthy weight and physique can also help improve one’s appearance. For instance, many actors say that being in shape gives them a better sense of self-confidence and overall well-being, which can positively affect their performances.

However, there are also instances in which actors and actresses tend to go through weight loss to fit into the role they are going to play. This is not necessarily a bad thing if required for their role, but it’s important to remember that one’s physical appearance should not come at the expense of their health.

Ultimately, the best way to achieve proper health is to eat a well-balanced diet and maintain an active lifestyle. Moreover, keeping a positive mindset can be beneficial in overcoming any obstacles that one may face in their journey toward better health.