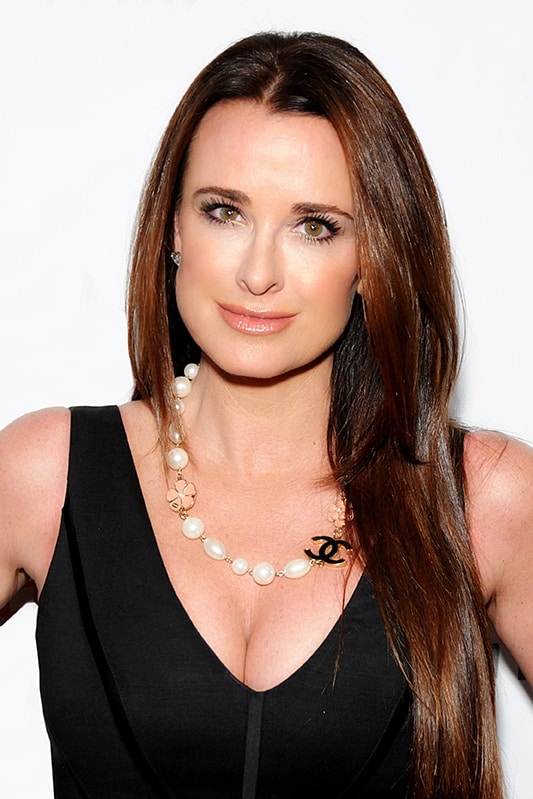 Kyle Richards Umansky also known as just Kyle Richards is an American actress and reality star who is best known for The Real Housewives of Beverly Hills where she is a part of the main cast since its inception in 2010.  She is also known for portraying Lindsey Wallace in John Carpenter’s Halloween (1978) and Halloween Kills (2021).

Aside from being a reality star and actress, she is also a model, socialite, and philanthropist.

In 2021, Kyle Richards’ net worth is estimated to be around $100 Million, earning her the title ‘the second richest housewife’ in the show. Her sister Kathy Hilton, joined the latest edition of the show taking Kyle’s spot as the richest housewife. (1)

Kyle Richards was a former child star. Given the many years she spent in the industry there is no doubt that she has a big net worth.

A big chunk of her net worth can be tied with that of her husband. The reality star is married to Real Estate Broker and founder of The Agency, Mauricio Umansky who is valued at around $120 Million.

Kyle Richards grew up in the affluent neighborhood of Hollywood in Los Angeles, California to Kenneth Edwin Richards and Kathleen Mary Dugan. Her father is a business executive while her mother is a casting director. She was born on January 11, 1969, and is currently 52 years old. At birth, she was given the name, Kyle Egan Richards.  The reality TV star was named after Kyle Rote, an American football player who played for the New York Giants in the 50s. According to her Twitter, her parents has mistakenly thought that they were going to have a baby boy.

Kyle Egan Richards is the 6th child of her Dad and the 3rd of her mom. She has an older sister, Kim Richards who is also a part of RHOBH. Both of her parents had children from previous marriages. On her father’s side, she has three half-siblings: Kenneth Richards Jr., Diane Richards, and Grant Richards. Her mother had one child, her half-sister, Kathy Hilton, who was then adopted by her Dad. (2)

Paris Hilton and Nicky Rothschild are her nieces through her half-sister, Kathy Hilton.

Kyle Egan Richards was exposed to the bright lights of Hollywood at a very young age. She started acting when she was just 5 years old, because of this she didn’t really find it necessary for her to go into college.

Kyle Richards is currently married to Mauricio Umansky. They got married in 1996.

Love came early for Kyle Richards. She was just 18 years old when she fell madly in love with her first husband. It was 1988, the reality star was at the peak of her career when she decided to marry Guraish Aldjufrie, a native of Bali, Indonesia. Together they have a daughter, Richards’ eldest, Farrah Aldjufrie. Unfortunately, the couple separated in 1990 and filed for divorce after two years.

After the divorce from her first husband, Kyle Richards started seeing a news anchor for the CBS affiliate in Los Angeles. She told Andy Cohen on Watch What Happens Live that the man was Michael Tuck, who is 24 years her senior. The reality star also said that she was engaged and almost married to Michael, but that didn’t happen because she met her now-husband. (3)

Kyle Richards’ second shot at love would later come in 1994, in the person of Mauricio Umansky, a Los Angeles real estate agent. Mauricio Umansky is of Russian and Greek Jewish descent, as a son of Mexican television personality Estella Sneider, he was born and raised in Mexico.

Mauricio and Kyle, would later wed after two years of dating in 1996. At the time of their wedding, the reality tv star was already 4 months pregnant with their first child, Alexia Simone. She gave birth to Alexia Umansky on June 18, 1996. The couple would later welcome two more new members of their growing family, Sophia Kylie Umansky on January 18, 2000, and their youngest daughter Portia Umansky born on March 1, 2008.

This year, 2022, Mauricio and Kyle would celebrate their 26th Wedding Anniversary.

Kyle Richards grew up under the bright lights of Hollywood. At age 5, she started her acting career by portraying Julia in the television series Police Woman. After that, she appeared in 18 episodes of NBC’s Western historical drama Little House on the Prairie alongside her sister Kim Richards, where she played the character, Alicia Sanderson Edwards. In 1997, the sisters Kim and Kyle Richards were given a chance to play on-screen sisters in the thriller movie The Car.

During the 70s, Kyle Richards appeared in various television shows such as Flying High, Vega$, Fantasy Island, Time Express, and Carter Country. In 1978, she starred alongside Jamie Lee Curtis in the slasher film Halloween where she portrayed the character, Lindsey Wallace. The film Halloween was very successful, it was the one that popularized slasher films in the 1980s and it also helped develop the slasher genre.

Her role in Halloween has opened doors for her in horror films. She appeared in the horror film The Watcher in the Woods. From 1998 to 2006, she appeared in 21 episodes of NBC’s medical drama series where she played the role of Nurse Dori Kerns. In 2006, she played Lisa, a supporting character in the comedy film National Lampoon’s Pledge This!

Since 2010, she is part of the main cast of Bravo’s reality television show The Real Housewives of Beverly Hills. In 2012, she appeared on the cover of The Hollywood Reporter along with other Real Housewives franchise cast, Vicki Gunvalson, Ramona Singer, Caroline Manzo, and NeNe Leakes. A year later she portrayed modeling agent Casey McGraw in three episodes of NBC’s Days of Our Lives. In 2017, she appeared as a contestant on The New Celebrity Apprentice.

In 2018, she was a co-producer for Paramount Network’s comedy television series American Woman, a series inspired by her childhood.

In 2019, she was nominated for “Reality Star of 2019” at the 2019 People’s Choice Awards. In the same year, she was given the chance to portray the character of Lindsey Wallace in Halloween Kills, which premiered on September 8, 2021. Her performance in this film has once more gained praise from fans.

On November 16, 2021, she premiered as one of the casts of The Real Housewives All-Stars. In the next month, Kyle Richards started to star in The Housewives of the North Pole.

In the last days of 2021, People magazine announced that Kyle Richards will appear in the upcoming sequel Halloween Ends.

Aside from being an actress, she is also a businesswoman. On February 25, 2014, she launched a clothing line for HSN. She is also the proud owner of Kyle Alene Too, a chain of boutiques in The Hamptons and New York City. She also has a boutique in Beverly Hills. (5)

Kyle Richards joined the Real Housewives of Beverly Hills cast in season 1 in 2010 and has since been a part of it until now.

In her first season, Kyle was involved in various dramas. She once got involved in a fight with her sister Kim Richards during the birthday party of Taylor Armstrong. The fight was a result of various arguments. Another drama involving the star was when her daughter, Farrah Aldjufrie graduated from college and her nieces Paris Hilton and Nicky Hilton Rothschild decided to fly to Europe over attending the graduation. And who would forget the fight between her and Camille Grammer in her Malibu Home?

On RHOBH season 2, Kyle and her family move into a bigger house. She and Kim begins to reconcile after what happened to them in season 1, but it would be unsuccessful. In this season, she got into a physical altercation with Brandi Glanville at the latter’s house party.

On RHOBH season 3, Kyle Richards and her sister continue to rebuild their relationship after the latter came out of rehab. In this season a confrontation between her and Lisa Vanderpump ensued.

Season 4 was a bit rocky for Kyle Richads’ marriage with husband Mauricio Umansky. Several gossip magazines reported the latter cheating on the reality tv star. In this season, Kyle Richards had issues with co-stars Yolanda Foster and Lisa Vanderpump. A heated argument between her and Brandi Glanville ensued after Glanville riles Giraud de Ohoven up, however, they were able to patch things up and remain friends.

Since season 4’s reunion, Kyle Richards revealed that she has never spoken to Lisa Vanderpump at all and so by season 5 Lisa distanced herself from Kyle. In this season, Kyle and her family shocked fans when they visited Lake Tahoe via a jet, later on, Kyle flew to Spain for a trip in a 100-foot-long yacht. In this season, Kyle Richards would be seen constantly worrying about her sister, Kim, who was displaying erratic behaviors. She worried that Kim Richards may have been drinking again despite being released in rehab.

Season 6 was an exciting season for Kyle Richards but there were also a lot of family dramas. In this season she revealed that she is working with Warner Bros. on a script about her life growing up. In this season, Nicky Hilton was to wed James Rothschild. Kyle Richards and her family were uninvited a lot of times because of the ongoing feud between Mauricio Umansky and Rick Hilton, however, in the end, Kyle was able to attend the wedding together with her three daughters.

Season 7, was not toxic for Kyle Richards. It didn’t have much drama involving her.

In season 8, Kyle Richards’ friendship with Lisa Vanderpump was tested due to a lot of drama involving the two stars.

The tension between Kyle Richards and Garcelle Beauvais left in season 10 continued on in season 11. (6)