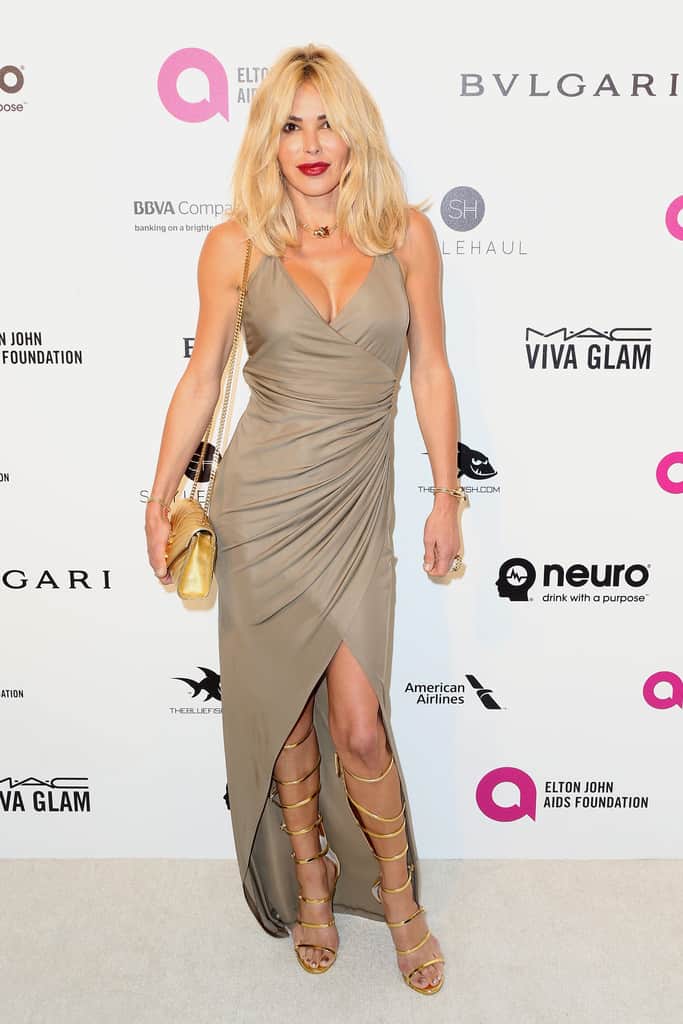 Sanela Diana Jenkins or simply Diana Jenkins is a famous Bosnian-born reality TV star in the United States of America. Other than her career in the showbiz industry, she is also a known entrepreneur, producer, and philanthropist. She is one of the newest addition to the cast of The Real Housewives of Beverly Hills.

In 2021, the estimated net worth of Sanela Diana is $300 Million. A huge part of her net worth comes from the divorce settlement she got from her husband, British financier Roger Jenkins in 1999. (1)

However, despite being one of the UK’s richest women because of this money Sanela Diana still works hard and has ventured into different businesses. She owns the swimwear brand Melissa Odabash and has a company called Neuro Drinks.

Her parents are Smajo Ćatić and Rašida Ćatić. Sanela grew up in a middle-class Bosnian family. Her mother was an accountant and her father was an economist. They lived in a concrete-block apartment but Sanela was happy growing up. Sanela Diana was studying economics at the University of Sarajevo when the war broke out in Bosnia and Herzegovina. They were forced to flee their home and move to Croatia as refugees for more than a year before migrating to the United Kingdom. (2)

Sanela Diana Jenkins had only one sibling. His name was Irnis Ćatić, and he was brutally killed by Serbian forces during the near-end days of the Bosnian War while staying at a village in Western Bosnia. He was just 21-years-old, an economics student and to him, Sanela Diana Jenkins dedicated the Irnis Ćatić Foundation. He was a man who believed in a nation grounded on the principle of tolerance, a nation where children are raised away from fears and bred by away from ignorance and poverty. In his beliefs and principle, the foundation built its Mission and Vision.

The reality star was heartbroken by her younger brother’s murder but at the same time, she wanted to immortalize his memory and capture his love and hope for Bosnia in the foundation.

Prior to the beginning of the Bosnian War in 1992, Sanela Diana was a student of Economics at the University of Sarajevo in Bosnia and Herzegovina. However, because of the war, she wasn’t able to finish her degree there. When they migrated to London, she studied at the City University where she obtained a degree in Computer Science.

In 1999, Sanela Diana was married to Roger Jenkins, a wealthy banker from London. Together they had two children, daughter Eneya and son Innis. Her son Innis, was named after her younger brother who was brutally killed by Serbian forces during the war in her home country. After 10 years of marriage, the couple would divorce. Due to the divorce, Sanela Diana obtained $300 Million from her first husband in divorce settlements. (3)

Currently, she is in a relationship with R&B singer-songwriter, dancer, and actor Asher Monroe. The couple welcomed their first child together in November of 2020, Eliyanah. The couple are yet to be married, but who knows we might hear wedding bells soon.

While still a student at City University, Sanela Diana, acquired the swimwear line Melissa Odabash which she was able to acquire after working on multiple jobs. This clothing brand will be her bread and butter for years to come before becoming a big name. Aside from her clothing line, she also owns the beverage company, Neuro Drinks. The reality tv star was able to make this company a multi-million dollar beverage company. It provides healthy and non-carbonated beverages to customers and it has over 65,000 locations in different parts of the UK and the US. Aside from all of this, Sanela Diana is also the CEO and founder of the music label, D Empire Entertainment.

Despite being a successful businesswoman, Sanela Diana still finds a way to give back to her roots by doing humanitarian work for her home country of Bosnia and Herzegovina. In fact, Sanela dedicated a large part of her life to her philanthropic works and was even able to change the lives of many people

It is not unknown to many that, Sanela Diana was a victim of war. Their family lost everything because of the Bosnian War including her younger brother Irnis. Sanela Diana channeled her grief and anger into creating a foundation that would benefit her countrymen, and that foundation is the Irnis Caltic Foundation. The foundation was dedicated to the memory of her 21-year old younger brother who was brutally killed by Serbian Forces only a couple of days before the end of the Bosnian War.

According to the reality TV star, her brother had great hopes and dreams for Bosnia and Herzegovina. However, he wasn’t given a chance to see the end of the war because he died. Sanela wanted to immortalize his memory and to finish the things he was not able to do. Her traumatic experience allowed her to feel empathy for those who need help the most because she, herself was put in that position many years back.

In an interview with The Guardian  back in 2009, the reality TV star said the following, ” I didn’t have friends, I didn’t have family, I didn’t have money. I feel that, to this day, if I’d had money, maybe my brother would still be alive.”

The Irnis Catic Foundation provides financial support for the establishment of  Bosnian schools, orphanages, and many others. Aside from her foundations, she was also involved in other humanitarian works one of which is UCLA’s Sanela Diana Jenkins Human Rights Project and the Jenkins-Pen Haitian Relief Organization. Her humanitarian works were recognized by Elton John and in 2012, she was awarded by the Elton John AIDS Foundation with the Enduring Vision Award. (4)

Sanela Diana is one of the newest cast members to join The Real Housewives of Beverly Hills. Her first appearance in the show will be in season 12 in 2022 where she and artist Sheree Zampino are the two new cast members.  Other cast members during this season are Kyle Richards, Lisa Rinna, Dorit Kemsely, Erika Girardi, Garcelle Beauvais, Sutton Stracke, and Crystal Kung Minkoff. (5)