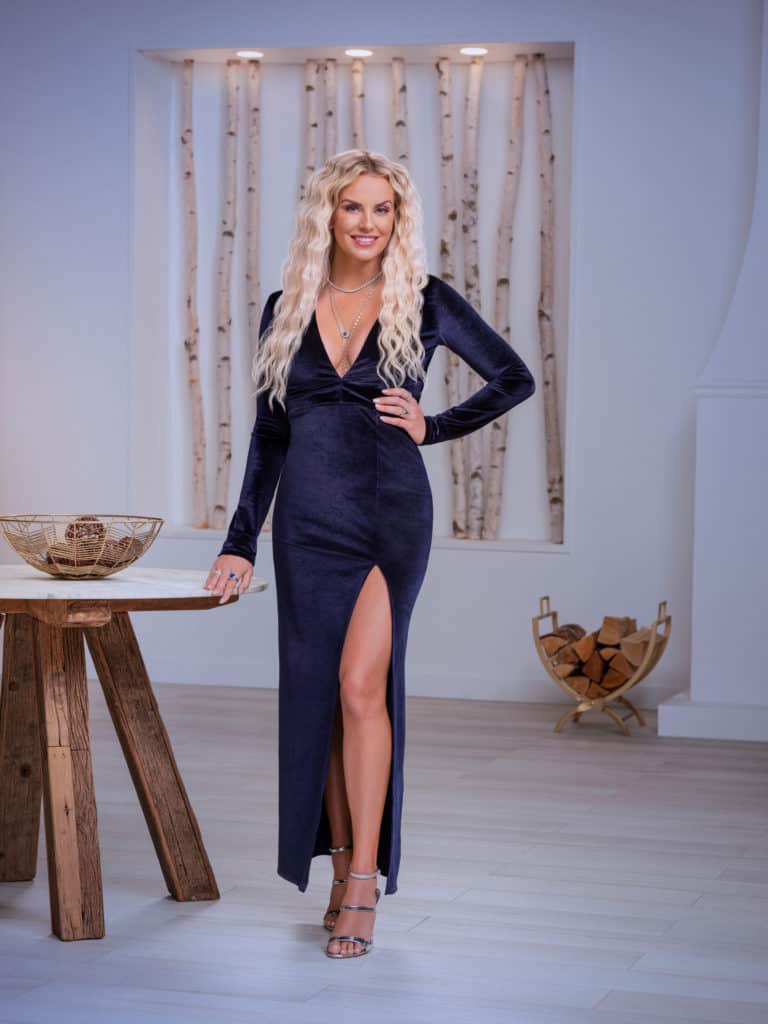 Whitney Rose is an American entrepreneur and a reality television personality best known for her role as the youngest cast member on “The Real Housewives of Salt Lake City.” She is a happily happily married woman with two children.

The real housewife is descended from “Mormon Royalty,” but she no longer corresponds with the religious doctrine after falling passionately in love with her boss, Justin Rose, who is now her husband.

In 2022, Whitney Rose’s net worth is estimated to be $3 million. Her career as an entrepreneur is her main source of income. She started Iris + Beau, a natural skincare business, in 2017 and has been committed to it ever since. Her skincare line is manufactured entirely in the United States, using only the finest natural and organic basic ingredients to enhance and nurture your skin. See how her net worth ranks among the net worth of the Real Housewives of Salt Lake City. (1)

Whitney Rose was born and reared in the United States by her parents. We were unable to learn more about her family since no such information is publicly accessible. As a result, her father and mother’s identities remain unknown. There is also no information on whether she has any brothers or sisters. Nonetheless, as soon as new information becomes available, this page will be updated.

Whitney Rose enrolled at Saint Mary’s College of California and graduated in 2016 with a Bachelor of Business Administration (B.B.A.).

Whitney Rose is blissfully married to her former boss, Justin Rose. Justin Rose is nearly 18 years older than the real housewife. Despite their age difference, the pair maintains a happy marriage. They had an affair after falling in love and within weeks, they had both left their spouses to be with one other.

The duo has been married for 10 years and has two children, Bobbi and Brooks. Justin is also a father of two children from a previous marriage. Whitney is very close to her stepchildren and spends a lot of time with them. She even posted photos of them on her social media pages. (2)

According to her Linkedin page, Whitney Rose began her career in skincare at Nu Skin. She is said to have met Justin there since he worked there for a long period as well. After almost 28 months in the firm, she quit in November 2009.

Upon leaving Nu Skin, she worked for three years at InVision Communications before starting her own company. In April 2015, she started working as a Direct Selling Account Executive at the said company, where she stayed for ten months until January 2016. In July 2017, the entrepreneur was promoted to Account Manager after being relocated to Draper, Utah. After 1 year and 4 months as an account manager in Utah, she ultimately departed in October 2018.

In 2017, she launched the skincare company Iris + Beau with the goal of serving all skin types with clean, natural products for a healthy lifestyle. She recently announced that the business would be rebranded as Wild Rose Beauty, which was subsequently confirmed. (3)

Though exciting, the change in her company has resulted in some major issues, which she revealed in further depth on December 12 in a drama-filled episode of RHOSLC. During the show, she announced the amount of money she has donated to her skincare business. She also told Justin that she had chosen to establish a $1 million line of credit to assist Wild Rose Beauty prosper. She went on to claim that for the sake of rebranding, she is risking her company, marriage, and home.

Whitney has extolled the benefits of her skincare products on her skin’s appearance. She revealed her motivation for starting the skincare company Iris + Beau, which she began years ago because she had bad skin, at the Season 2 premiere of RHOSLC. Whitney loved the idea and goods of Iris + Beau, but she decided to rebrand the firm Wild Rose Beauty. The concept of a wild rose, a flower with no boundaries, inspired the new name.

Today, Whitney Rose manages her skincare brand and is one of the stars of “The Real Housewives of Salt Lake City.”

Since the first season of “The Real Housewives of Salt Lake City,” Whitney Rose and Lisa Barlow have had a running rivalry. The turmoil between the two housewives has been relentless throughout the years, from leaking pictures of text exchanges to jumping in between friendships. Heather Gay is adding to the “bad weather” Lisa blames them of this time. By pointing out Lisa’s dubious actions, Whitney is getting under her skin. Here’s a glimpse behind the scenes of their failing relationship after two seasons of fighting.

At the RHOSLC season 1 reunion, Lisa shouted out, “Whitney, Heather, Bad Weather. Tornado, Spin the truth, Destroy.” Lisa was furious at the moment because Heather and Whitney were working against her when it came to customer service concerns at her tequila firm. Whitney shared their private text message discussion after the reunion, revealing that she promised to exhibit Lisa’s Vida tequila brand during her vow renewal ceremony. Unfortunately, it was just the beginning of their on-air squabbles. Lisa has already been dubbed the franchise’s cruel girl, but she isn’t fond of the moniker.

On season 2 of RHOSLC, tensions between Lisa and Whitney only became worse as a new cast member, Angie Harrington, entered the picture. Angie and Lisa used to be good friends, but Angie has started spending more time with Whitney, which Lisa can’t bear. Whitney and Angie also find out to be relatives. In a footage obtained by The Daily Dish, Lisa, instead of appreciating their familial origins, made a cruel joke about them, calling them “inbred polygamy cousins.” A food firm Lisa works with pulled out at the last minute of an event thrown by Angie. Whitney and Angie were certain that Lisa was behind the shady maneuver, but when she was confronted with the claims, Lisa grew combative and denied them.

After asking Whitney out for drinks in the hopes of burying the hatchet, a representative from the catering business stepped up to inform Whitney that they had to cancel on Angie due to another commitment, and that Lisa had nothing to do with it. Whitney, on the other hand, was furious when she realized Lisa had no genuine aspirations of making peace with her. She only wanted to exonerate herself of any wrongdoing. It also looked to be the deciding factor in Whitney’s decision to be friends with Lisa. Furthermore, Whitney isn’t the only one that rubs Lisa the wrong way. Some of Lisa’s statements and actions have also enraged Mary Cosby and Jen Shah. Jen was irritated when Lisa came over to inform her about a present Whitney had given to Jen’s former stylist after their breakup.

Heather, on the other hand, made Jen wonder why Lisa chose to divulge this information. Was Lisa really defending Jen, or was she only attempting to make more people resent Whitney? It’s difficult for Lisa to appear innocent when all of her shady conduct has been exposed on RHOSLC. Whitney isn’t the only one who has a strange reaction to Lisa. But the fact that she was one of the first to do so simply goes to show how much Whitney and Lisa don’t get along.