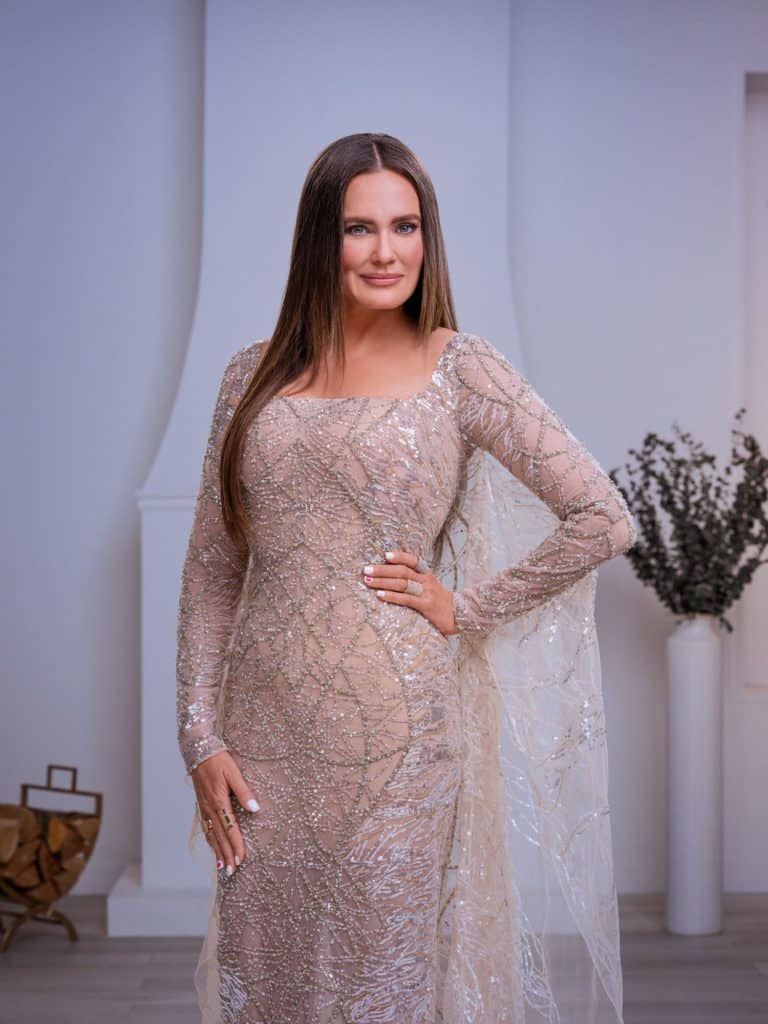 Meredith Marks is a reality television star who has starred on “The Real Housewives of Salt Lake City.” She has a beautiful face and a captivating attitude that has enchanted her fans over the years.

At the same time, the real housewife is also a renowned jewelry designer and her fascination with jewelry started when she was a little child, admiring her Great Grandmother’s stunning collection, which she had amassed from all around the globe. Her favorite stone was a 40-carat deep blue aquamarine that her great grandmother had spent years looking for and had set into a cocktail ring encrusted with diamonds. It was on show in the window of the American Gemological Laboratories.

In 2022, Meredith Marks’s net worth is estimated to be $3 million. Her career as a jewelry designer is her main source of income. Rihanna, Tina Fey, Gwyneth Paltrow, and Courteney Cox are among the celebrities for whom she has designed jewelry. Because of her enthusiasm for jewelry creation, the real housewife appreciated her great-antique grandmother’s jewelry items. She enjoys gold, diamonds and has a substantial ring and bracelet collection. “Meredith Marks Jewelry” embodies the concept of living luxury. She creates for those who share her passion and purpose. Individual parts represent the user’s strength, instilling independence, confidence, and empowerment in the wearer. (1)

Her wealth is also increasing from being a reality tv star and other media appearances. As long as she is a cast member of the program, the sum will undoubtedly rise since celebrities have admired her gorgeous jewelry designs. She’s also highly active on social media, having over 348k Instagram followers and 61.6K Twitter followers, although she has yet to perform any brand endorsement work.

Meredith Marks is 51 years old. She was born in the city of Chicago, Illinois, on December 15, 1971. The real housewife has a close connection with her parents, and she expresses her love for them by writing them letters on special occasions such as birthdays, Father’s Day, Mother’s Day, and anniversaries. Her mother’s identity has been disclosed as Gloria Kaufman. In February 2021, her father, on the other hand, passed away. For the latter half of his life, he battled Alzheimer’s and dementia. (2)

In college, Meredith Marks majored in fine arts. She worked as a model while studying. She later earned two degrees from Northwestern University and graduated from Kellogg Business School with an MBA and a law degree.

Meredith Marks is married to Seth Marks. She married her husband Seth in the early 1990s. Seth Marks is the Chief Merchandising Officer of Channel Control Merchants LLC. They have three children together named Reid, Chloe, and Brooks. Reid, their oldest son, has begun working in New York City. Her daughter, Chloe, is a student at the University of Colorado, and her youngest son, Brooks, is also a student. Chloe and Brooks, two of her children, have been on RHOSLC multiple times. Her oldest son Reid, on the other hand, is yet to participate on the program due to his hectic schedule. (3)

Before December 2020, Meredith’s relationship with her husband Seth was troubled. According to the story, Seth filed for divorce from Mark in August of 2019. Fortunately, the pair reunited in December 2020, and she credited quarantine for helping them save their marriage. They were able to communicate normally throughout their confinement. The pair finally learned and respected each other’s sentiments as a result of their actions. The relationship is now in a joyful and stronger state than ever before.

Meredith Marks worked in a variety of real estate development enterprises after graduating from business school. Meredith also worked at a fitness club at the time. She was, however, unsatisfied with her profession at the time and eventually found her passion in life, which led her to start creating jewelry. In 2009, the RHOSLC star created her own jewelry line, marking her first foray into the jewelry design sector. Unfortunately, she had the misfortune of launching her company during a downturn. The real housewife afterwards enrolled in Gemological Institute of America programs. She was given the option to manufacture her drawings and ship them to various regions of the United States, India, and Hong Kong. She has established herself as a prominent celebrity jewelry designer.

In Park City, she runs her own collective shop. Bracelets, rings, necklaces, high-quality clothes, masks, and purses are among the items sold at the boutique shop. Meredith sells her own line of items under the name “Meredith Marks.” Her jewelry creations have been admired by a number of well-known celebrities. Rihanna, Gwyneth Paltrow, Tina Fey, and Courtney Cox are among the well-known celebrities. (4)

For her work, she won the JCK Editors’ Choice Award and was a FGI Rising Star Finalist in 2016. The reality star was designated a Salute To Style recipient by The Madison Boys and Girls Club in 2018, after receiving the JCK Best of the Best Award, the JCK Jewelers Choice Award, and being named a FGI Rising Star Finalist in 2017. She has also been honored with the ICE Award.

Today, Meredith Marks is still a jewelry designer, company owner, and one of the stars of “The Real Housewives of Salt Lake City.”

Season 2 of RHOSLC has officially aired, and it’s time to discuss fellow RHOSLC star Lisa Barlow and Meredith Marks’ deteriorating relationship. Longtime BFFs Lisa and Meredith started the season off on a sour note, which surprised fans. During her spat with Jen Shah, Meredith accused Lisa of being unfaithful, while Lisa believed Meredith had failed to defend her when she clashed with Whitney Rose and Heather Gay. While the two ladies have a long history together, their continual feuds with the other Housewives stars might spell the end of their relationship and spark the next major Housewives squabble.

Meredith and Lisa’s biggest beef has been Lisa’s tight relationship with Jen. Jen and Meredith have been at odds since last season. Jen seemed to be targeting Meredith’s marriage and family at the time. In Meredith and Jen’s conflict, Lisa has adopted a neutral position, often attempting to serve as a referee and peacekeeper. Lisa’s neutrality, according to Meredith, is evidence that she’s becoming a better friend to Jen. Meredith said in the inaugural episode that when she sent Jen “liked” tweets attacking Meredith’s family, Lisa opted to ignore them. Lisa acknowledged that she had received the texts but claimed that they had nothing to do with her.