What Happened in The Real Housewives of Atlanta Season 7? (Full Recap) 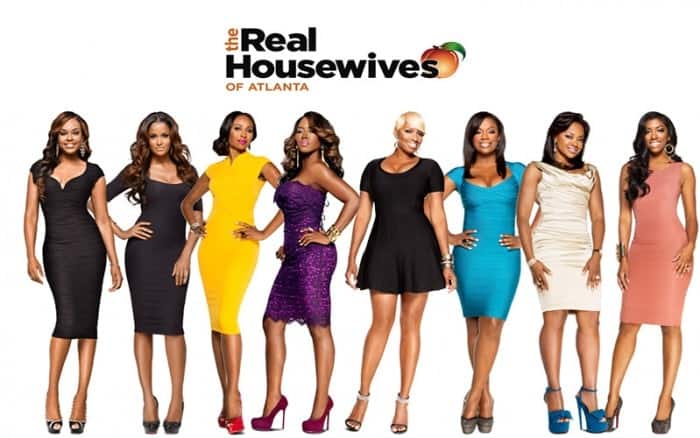 The Real Housewives of Atlanta season 7 aired from November 14, 2014, to May 10, 2015, on Bravo. Five of the six cast members from season 5 returned as series regulars to the reality TV show. A new housewife was confirmed to be joining the other ladies.

Season 7 consisted of 25 episodes. Shortly after the installment ended, the fifth spin-off to The Real Housewives of Atlanta was released on Bravo. The three-part TV special was titled Kandi’s Ski Trip. It featured Kandi Burruss and her husband, Todd Tucker, as their family went on a ski trip together.

Cast and Overview of The Real Housewives of Atlanta season 7

Initially, it was reported that all cast members from season 6 are all returning in season 7. That means Kandi, NeNe Leakes, Cynthia Bailey, Phaedra Parks, Kenya Moore, and Porsha Williams are coming back to the reality TV show.

But ahead of its premiere, Bravo released the cast photo of season 7, and Porsha was not part of it. She was demoted to a recurring role. The casting decision surprised the other cast members. Andy Cohen clarified the decision, saying, “it was about the amount of story we got from Porsha this season.”

He added that Porsha was initially intended to be a full-time cast member, but they “haven’t gotten enough to merit that.” Then, it was revealed that radio and television celebrity Claudia Jordan was the newest full-time housewife, while singer-actress Demetria McKinney played a supporting part.

During its initial broadcast on November 9, 2014, the season’s premiere episode drew over 3.8 million viewers, including 2.2 million people in the 18-49 demographic, according to Nielsen ratings. It set a record for being Bravo’s most-watched season opener. NeNe heads to Vegas to join the cast of Cirque du Soleil’s “Zumanity,” a cabaret-style production. Phaedra and her husband, Apollo Nida, prepare for the sentence day. Kenya and Porsha both open up about the fallout from the physical confrontation that occurred during the taping of the reunion episode last season.

Cynthia balances her personal life with her future business ventures. Kandi and her husband Todd are preparing to welcome his daughter, Kaela, into their home. NeNe feels nervous as she prepares to perform in her debut show as the host of “Zumanity” in Vegas. The tension between Phaedra and Apollo grows when the latter shows up unannounced at Ayden’s first dentist appointment.

Kandi decides to purchase a new home for her mother, and the two sit down to discuss her and Todd. Cynthia hosts a party and purposefully excludes several of the housewives. Apollo later arrives at the gathering and confronts Kenya about their alleged romantic history. The episode formally introduces the newest housewife, Claudia Jordan, a radio personality and Kenya’s good friend. NeNe returns to Atlanta from her concert in Las Vegas and gets caught up in all the drama that has been going on.

Kandi interferes with Apollo and Phaedra’s relationship by telling her the truth about Apollo and Kenya. Cynthia confronts Porsha about her comments regarding her deteriorating friendship with Nene. Todd confronts Kandi and her team with reprimands, which causes a tense situation inside the Kandi Factory. Phaedra struggles to deal with Apollo’s choice as the latter meets with Cynthia’s husband, Peter Thomas, to discuss his connection with her.

Claudia feels shady after meeting Porsha at work. Kenya bursts into tears after discussing Apollo’s confessions with Kandi. NeNe speaks out about her friendship with her other housewives and calls Kenya’s innocence into doubt. With Kenya’s assistance, Claudia tries to settle in to her new Atlanta house and discusses her family’s history. Kandi realizes her house is in bad shape as she prepares to sell it. Kandi throws a dinner party to bring all the housewives together so they can confront each other about the conflict.

The fallout from Apollo’s revelations continues. For the first time since the reunion event, NeNe and Cynthia get together and talk about their relationship. Phaedra returns to work in an effort to avoid Apollo’s drama, beginning with a lawsuit concerning Derek J., who was alleged to have stolen his customer’s weave. NeNe and Cynthia are still attempting to build a relationship.

Kandi and Todd pay a visit to his mother, Sharon, in New York, where she confronts Kandi with Mama Joyce’s accusations and demands her to defend herself and her mother. Cynthia is also in New York for a runway show for a friend’s line during New York Fashion Week. NeNe is set to go live to promote her clothesline. Cynthia returns to New York and begins working with singer/actress Demetria McKinney, who makes her debut appearance on the show. Kenya is eager to return to the entertainment industry and meets producer Roger Bobb, who is dating Demetria.

At the premiere party for Demetria’s music video, Apollo confronts Phaedra about their marital problems. Kandi’s relationship with her mother becomes strained.

Episode 8 - "Tea With A Side Of Squashed Beef" Kandi and Todd work to improve relationships among the members of their blended family. Kenya begins searching for a new office to facilitate the launch of her ambitious new company plans. Claudia welcomes her mother and grandmother, who had come to visit her in Atlanta to have fun.

NeNe invites Cynthia and Kenya to sit down with her and Porsha and sort out their differences. Phaedra gets ready for a new life as a single mom. Phaedra attempts to go on with her life, both professionally and emotionally, while dealing with Apollo while living under the same roof until he is sentenced to prison. Cynthia and Peter begin their business partnership by looking at possible new locations for Bar One.

Kandi hosts a sex and relationship party and invites all the ladies, which ends with a surprise revelation accusing one of the husbands of being unfaithful. NeNe gets to know Claudia better. The ladies travel to Puerto Rico for the first time. NeNe and Claudia’s argument becomes heated, and as a result, the drama between them intensifies. They engage in a verbal duel. NeNe and Claudia resolve their fight over the dinner table, leaving the ladies divided. Kandi throws a beach party with the hope of reuniting all the housewives.

Episode 12 - "Beauties in the Fast Lane" Kenya and Claudia join Cynthia on a road trip to Charlotte, where they reunite with Kordell Stewart. Kandi and Todd talk about their future plans and go to the doctor. Kandi deals with the fallout from the cancellation of the “A Mother’s Love” tour. Kenya wishes to resume her producing and acting careers. Porsha and Claudia discuss their problems.

Apollo talks with Peter and discusses his and Phaedra’s failing relationship. Kenya has begun casting for her upcoming television show. Before going to jail, Apollo had his final face-to-face conversation with Phaedra.

Episode 15 - "Chocolate Does A Body Good" Kenya and Cynthia confront Phaedra about supposedly cheating on Apollo, which causes things to get tensed during the dinner party. Todd and Kandi decide to attend marriage counseling. NeNe suggests that they should all attend counseling together. Kandi is questioned over her deteriorating friendship with Phaedra. Claudia tries stand-up comedy in an effort to alter her career path. Phaedra confides in NeNe about her failing relationship with Kandi and attempts to work through their issues. The evening takes an unexpected turn after NeNe gathers all the women for a therapy session with Dr. Jeff. Dr. Jeff keeps guiding the ladies toward stronger relationships. NeNe is anxious about her upcoming Broadway performance. Phaedra ponders her next moves regarding her future. Claudia cannot let things go and is still determined to reunite all of the girls and make amends. The women are all set to travel to the Philippines. All the ladies agree to go, except for NeNe, who wishes to work on her impending Broadway role. Everyone seems to get along well early on in the trip, but things get heated during dinner. The housewives go shopping, see a volcano, and have a pajama party in the Philippines. NeNe had a Broadway musical costume fitting in New York. The women return to their regular lives after their trip to the Philippines. Kenya is still working on her television pilot, Life Twirls On, alongside Cynthia, who is struggling to grasp the Jamaican accent. Kandi and Todd go out to dinner. Phaedra organizes a fundraising event. NeNe unexpectedly stops by and fights with Claudia. Kenya hosts a viewing party for her new pilot, Life Twirls On, and a wedding-themed party in the season finale. NeNe is about to make her Broadway debut in Cinderella. Cynthia and Peter receive a phone call from Apollo in prison. Todd and Kandi go to Mama Joyce’s new home for a dinner party. Andy Cohen gathers all of the women to talk about the season’s turmoil. Phaedra speaks candidly about Apollo’s imprisonment. Kandi confronts NeNe about her behavior during the season. Porsha joins the discussion and reacts to all allegations against her for dating a married African man. The women analyze the changes in the circle and how the dynamic has evolved, which leads to Kandi and Phaedra discussing the changes in their friendship. Cynthia discusses her decision to be more vocal this season after being accused of stirring the pot. The husbands join in to discuss the previous season. NeNe and Cynthia talk about their friendship and whether there is any chance of an amicable settlement. Claudia and NeNe discuss their rocky journey and make an effort to come to an understanding. NeNe breaks down when Dr. Jeff, a therapist, meets the ladies to discuss their group therapy session.