What Happened in The Real Housewives of Atlanta Season 5? 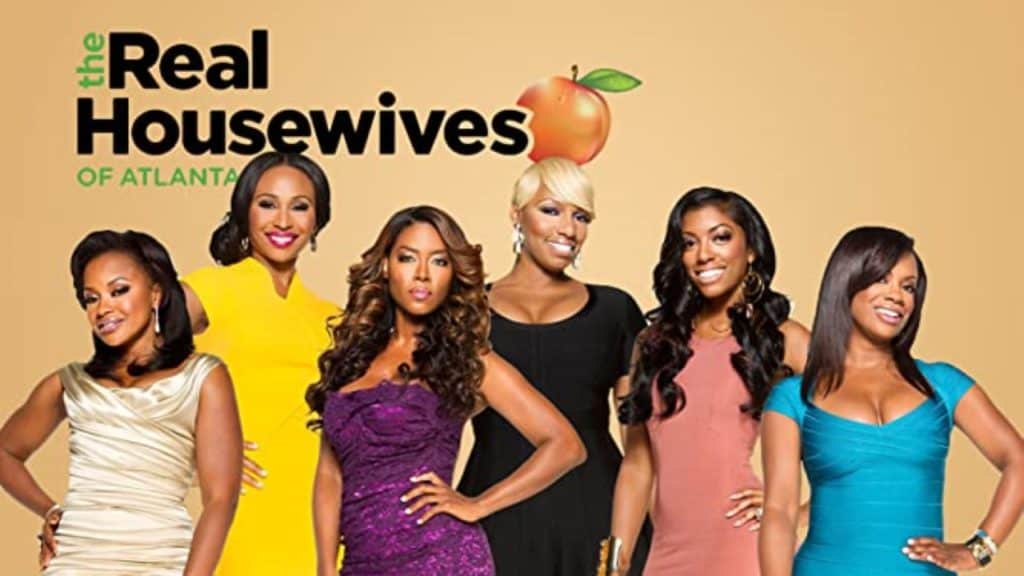 The Real Housewives of Atlanta season 5 aired from November 4, 2012, until April 28, 2013, on Bravo. The fifth installment of the reality TV show consisted of 24 episodes. Six cast members from season 4 returned, and two new housewives have been added.

Season 5 kicked off with an episode titled “Hairstylists Tell All,” featuring the housewives’ hairstylists. The hour-long episode was dropped on October 28, 2012. The official premiere aired on November 4, 2012, and the season ended on March 31, 2013. A three-part reunion special followed it.

Cast and Overview of The Real Housewives of Atlanta season 5

Sheree Whitfield, an original cast member since season 1, departed at the end of the fourth season. Reportedly, she no longer wants to be part of the “fighting and drama.” Two new housewives joined the cast: former Miss USA Kenya Moore and Kordell Stewart’s wife, Porsha Williams.

As for the original cast, The Real Housewives of Atlanta season 5 sees NeNe Leaks reconciling with Gregg Leaks and reconsidering marrying him again. Kim Zolciak was forced to leave her mansion, which she and her husband, Kroy Biermann, had attempted to buy less than a year before.

The drama continues with the arrival of Kenya and Porsha. NeNe questioned Kenya’s unfaithful behavior towards her boyfriend Walter during a group trip to Anguilla. This has led to a fight between NeNe and Porsha against Kenya.

Kenya is considering marrying Walter, despite their relationship problems and the allegations against her. Phaedra Parks and Kenya released competing fitness DVDs after the joint venture arrangement for the project fell through.

Porsha attempted to repair her failed marriage to Kordell through therapist sessions. Also, the series saw the departure of Kim. Her exit is due to “no longer wanting to participate in events with the group.” Her departure made NeNe the only original cast member introduced in season 1. Kandi and her partner Todd Tucker take a step further in their relationship and move in together, while NeNe and Gregg reconcile. Kim is distressed as a result of her unexpected eviction. Phaedra intends to broaden her funerary empire to include pet burials.

This episode marks the first appearance of Kenya. She was introduced as the newest cast member and showed the other housewives who’s boss at Cynthia’s Bailey Agency event. However, Cynthia puts Kenya in check and refuses to bow down. NeNe maintains her recent success as she advertises The New Normal, her newest sitcom, in Los Angeles. Kim celebrates her birthday despite facing the possibility of becoming homeless. Kandi adjusts to her new life with Todd while she and Phaedra bond with Kenya.

Meanwhile, Kenya is dealing with family obligations and a shocking revelation from her partner. Cynthia organizes a party, resulting in yet another clash with Kenya. Porsha makes her first appearance in this episode. Kenya is invited to a fundraiser for Hosea Feeds the Homeless, a well-known Atlanta charity, by new Housewife Porsha. The latter is the founder’s granddaughter and is married to former NFL star Kordell Stewart.

After an incident at the event, Kenya and Porsha’s relationship gets off to a bumpy start. NeNe travels to New York for business and spends the day exploring the city with Cynthia. Phaedra is planning her next big business venture: a workout video.

Kandi struggles with the thought of leaving her former residence, while Kim is considering returning to her former townhouse. Kandi settles into her new house. Kim is hastily gathering her belongings and preparing to return to her townhouse. Porsha is upset because of a fight she had with Kenya.

Episode 5 - "No Excuse for Excuses" Cynthia and her husband, Peter Thomas, plan a couples’ trip to Anguilla with NeNe and Gregg. They consider inviting the rest of the housewives. Kenya and Phaedra take their boyfriends on a double date to a nearby amusement park. Porsha undergoes a fertility scan as she prepares to have twins.

The girls gather for brunch, and things get heated when Kim’s commitment to friendship is questioned. As a result, a furious Kim storms off and breaks off connection with the group, officially leaving the show. In light of Kim’s departure, Cynthia decides to include Porsha and her husband in the group’s trip to Anguilla. Kenya and Apollo become closer, which leads to conflict with Phaedra. NeNe begins to doubt Kenya’s friendship with Walter. Kenya and Porsha got into a fight. Kenya is upset about an argument with Porsha at a gathering of the other women the night before their trip to Anguilla ends. Amid a dinner party, Kenya, who is still hoping to get a marriage proposal from Walter, wonders if it will happen and doubts their connection.

Episode 9 - "Dress Down and Strip Bare" Kenya is still questioning her connection with Walter when they return from their vacation to Anguilla. She confronts him about their connection. Porsha invites Cynthia and Kandi over to her house, where they discuss having kids and marriage prospects. NeNe is selected for a cover photoshoot.

Cynthia questioned Peter about their connection after reading a blog site rumor that Phaedra and Apollo were getting divorced. Both couples decide to go to an exotic club as Phaedra and Apollo discuss their relationship problems. Before heading to Los Angeles to film her role in The New Normal, NeNe must bond with her new granddaughter and arrange a move to a new house in the Hollywood Hills. The other women organize a farewell celebration for her.

Kandi adjusts to her new life and considers marriage. Kenya landed a boxing-themed photo shoot for a magazine and broke up with Walter during a fishing date. Phaedra and Apollo begin concentrating on their fitness training video, which causes conflict with Kenya over a prospective business opportunity. Kenya then chooses to start her own fitness workout video. NeNe adjusts to her new life in Los Angeles and considers relocating there. Kenya announces the news about her personal fitness video due to the termination of Kenya and Phaedra’s business agreement. Phaedra discovers Kenya’s deviant behavior and begins revealing information about her.

NeNe returns to Atlanta to spend time with her granchild. Cynthia is casting for her forthcoming charity runway show. Phaedra and Kenya are still working on their respective fitness workout video projects. Kenya then confronts Phaedra about the aftermath of their fitness training video business arrangement and harsh comments.

Cynthia strikes a deal to start a pageant division at her agency, including hosting her first one. Kenya and Porsha meet at a restaurant, but things get tense when Kenya starts to doubt their friendship with Phaedra.

NeNe meets her acting coach and becomes more comfortable with her new life in Los Angeles. Kenya appears at a charity event, imitating Phaedra in the same revealing outfit she wore on vacation to Anguilla, shocking the other women. Porsha works tirelessly for Kordell‘s Harlem Renaissance-themed 40th birthday party. Cynthia is irritated by Porsha’s nonexistent assistance for the charity pageant. Kenya is distraught after discovering two suspicious lumps in her breasts during a doctor’s visit. Kandi’s manager, Don Juan, advises her to focus more on her career. Cynthia allows Kenya to be a judge in her Miss Renaissance pageant. Kandi collaborates with Marvin Sapp on her debut gospel single. Her father visits the studio to thank her for acknowledging her holy roots. Phaedra invites Kandi and Todd to dinner. The ladies travel to Hollywood at NeNe’s invitation to see The New Normal set and the studios. NeNe is upset when the women arrive at her dinner party more than two hours late and are turned away. The women travel to Las Vegas. Porsha becomes uncomfortable after learning that the ladies have arranged a trip to a strip club. In the limo, Porsha and NeNe fight over NeNe’s opinion of Porsha’s relationship with Kordell, which prompts Porsha to end the trip early.

Kenya and Phaedra make an effort to patch things up. Nene, Cynthia, and Kenya attend a charity event with a drag queen, while Kandi and Phaedra miss the limo trip. NeNe is on a press tour in New York City to promote her series. Porsha waits until she and Kordell return to their Atlanta home before taking a pregnancy test. Kandi reaches her breaking point when her business and home renovations go overboard. Kenya has had enough of Walter’s frequent appearances. Drama ensued when Kenya learned that Walter was present during Kandi’s housewarming party. Cynthia relieves the tension caused by Kenya’s overreaction. Porsha seeks advice from her therapist about her relationship with Kordell.

Kandi organizes her first Bedroom Kandi sales gathering, and the ladies witness how massive her empire has become. Phaedra and Kenya compete by starting production on their respective workout videos. Kenya organized her Hollywood Icons gala and assigned costumes to all of the ladies and the rest of the attendees. Later, the ladies are lavishly dressed for the party and ready to have a wonderful night. But when Porsha shows up in a completely different costume, Kenya takes offense.

Kenya kicks out Porsha and Kordell from the party and the other women decide to leave. NeNe shows up and steps in. She talks to Kenya, who eventually apologizes to the other women. Kandi and Phaedra attend a self-defense class. Porsha continues to see her therapist along with Kordell. Together with host Andy Cohen, NeNe, Kandi, Phaedra, Cynthia, Kenya, and Porsha discuss the good and the ugly of Season 5. Kenya and Phaedra clash when Kenya claims Phaedra is too fat to appear in a workout video. Kandi and NeNe discuss their rocky relationship. Kim makes a surprise appearance to defend her name and explain what she’s been up to since leaving the series. NeNe put Phaedra in the spotlight due to the drama that wasn’t shown in the series. The husbands and significant others share their thoughts on the season in the final part of the reunion. Kandi talks about her recent engagement with Todd and their new life together. The men discuss the drama surrounding Kenya and Walter’s split.

The identity of the Housewife accused of supposedly “sexting” one of the husbands is revealed.